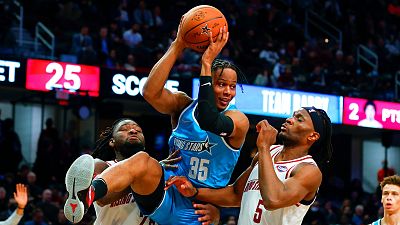 Five players from or with ties to Africa took part in the Clorox Rising Stars as part of the NBA All-Star Weekend in Cleveland, Ohio last night.

Team Barry defeated Team Isiah 25-20 in the final with the number one overall pick in the 2021 NBA Draft, Cade Cunningham, named the mini-tournament’s Most Valuable Player.

“I represent Nigeria. I represent Rivers State. I represent Port Harcourt, the city that I'm from. I know there's a lot of kids back home that look up to me and want to be in the position that I am today, and I'm a role model to a lot of kids whether I like it or not. So, I have to keep doing the things that I'm doing, being positive, and just continue to work hard, just so I can keep being an inspiration to those kids,” said Achiuwa.