The waters of the Gulf of Guinea, rich in hydrocarbons and fisheries resources, are increasingly exposed to piracy, said security officials from the region meeting Monday in Pointe-Noire, southern Congo.

"This area is one of the key zones for international trade (...) rich in hydrocarbons representing a quarter of the world's reserves" said Congolese Prime Minister Anatole Collinet Makosso, who presided over the opening of the symposium organized with the French Defense Ministry.

"Paradoxically, it is a high-risk maritime zone following the migration of the phenomenon of maritime piracy from the Gulf of Aden located on the Horn of Africa" he added.

According to the head of the Congolese government, the Gulf of Guinea, which stretches from Senegal to Angola, has recorded for the year 2020 alone, 195 attacks on ships with means and methods of pirates continuously strengthened for some time.

In the same year, 130 of the 135 kidnappings of seafarers recorded in the world, or more than 95%, took place in this area, according to a recent report by the International Maritime Bureau.

In 2013, the 19 countries that make up the Gulf of Guinea set up the "Yaoundé architecture" to carry out joint and concerted actions against piracy.

This third edition of the symposium of chiefs of staff of the Gulf riparian countries marks the beginning of the operationalization of this architecture, according to the organizers.

It will end on Tuesday with the organization of the Grand African Nemo exercise, a dynamic demonstration of navies off Pointe-Noire.

"This type of symposium aims to exchange on issues that are common to the Gulf of Guinea countries: predation on natural resources, including fisheries resources, piracy of course and the phenomenon of illegal immigration" explained to AFP General François Xavier Mabin, commander of French forces in Gabon. 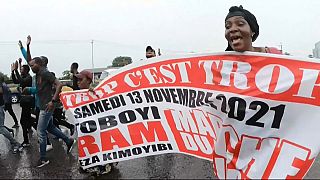