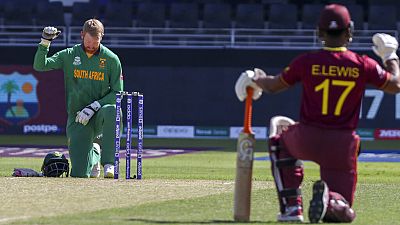 Quinton de Kock on Tuesday refused to play in a T20 World Cup game against the West Indies in protest after Cricket South Africa CSA ordered its players to take a knee before matches in support of the Black Lives Matter movement.

An hour before kickoff, CSA issued a statement in Dubai saying it had ordered players to make the anti-racism gesture ahead of their remaining games at the tournament.

In a second statement responding to de Kock’s withdrawal from the game, CSA said it noted the wicketkeeper-batsman’s “personal decision” not to take a knee and would decide on its next course of action after a report from team management. There was speculation that de Kock, a former national team captain, would return home from the World Cup.

CSA said it decided to force players to take a knee after concerns about the “different postures” taken ahead of warm-up matches and the team’s first World Cup game against Australia on Saturday.

Some members of South Africa’s team take a knee with their fists raised. Others stand with fists raised. De Kock, fast bowler Anrich Nortje and batsman Heinrich Klaasen, who are all white, have stood with their hands by their side before recent matches.

Ahead of the West Indies game, Klaasen and Nortje took a knee, as did every other South African player, in response to the directive.

In defense of the new policy, which suggests that players must take a knee before they play, CSA chairman Lawson Naidoo said “Diversity can and should find expression in many facets of our daily lives, but not when it comes to taking a stand against racism”

The different stances from players had previously provoked criticism from some quarters in South Africa, where issues of racism are constantly in the headlines because of the country’s history of forced segregation under the former apartheid regime.

Back home, many of the players “created an unintended perception of disparity or lack of support” for the anti-racism movement, CSA said.

However, compelling players to kneel before games stirred fierce debate and split opinion back home and, as de Kock’s situation showed, has created friction within the team.