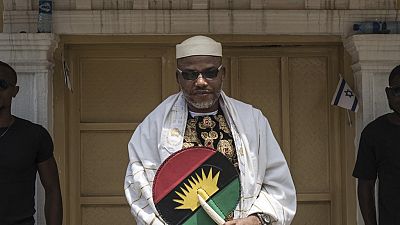 A high-profile case against Nnamdi Kanu, a Nigerian separatist accused of terrorism and treason was adjourned Thursday, lawyers said, after a court appearance under heavy security in the capital Abuja.

Kanu, 53, leader of the proscribed Indigenous People of Biafra (IPOB) group, which wants a separate state for the ethnic Igbo people in the southeast, was arrested abroad in June and brought back to Nigeria to face trial.

Leaving the courtroom Thursday, his lawyers Ifeanyi Ejiofor and Aloy Ejimakor told AFP that Kanu had pled "not guilty" to seven charges including terrorism and treason before the case was adjourned to November 10.

Dozens of heavily armed police, balaclava-wearing security operatives and Nigerian soldiers were deployed all around the federal high court.

Journalists were barred from entering the premises and threatened by police with tasers, an AFP reporter saw.

Lawyer Ejiofor said he urged the court "to dismiss the seven count charges... acquit our client and discharge him."

Kanu's family and lawyers say he was illegally extradited from Kenya, though Nigerian officials have not given any details.

He is a British citizen and used to work as an estate agent in London, where he also ran the outlawed Radio Biafra.

Separatist movements in Nigeria are particularly sensitive, after a unilateral declaration of independence in 1967 in Biafra sparked a brutal 30-month civil war.

More than one million people died, most of them Igbos, from the impact of conflict, hunger and disease.

Southeast Nigeria has seen a spike in violence with at least 127 police and other security personnel killed by gunmen this year, according to a local media tally.

Authorities have blamed the attacks on IPOB and its armed wing, the Eastern Security Network, a claim the groups deny.

Kanu was first arrested in October 2015 but was released on bail and fled the country in 2017.

IPOB called for a "sit-at-home" on Thursday across the southeast, to protest the arrest of their leader.

Another separatist, Sunday Igboho, who advocates for independence for the southwestern Yoruba people, was also recently arrested.

Igboho was taken into custody at the airport in neighbouring Benin, police and airport sources said.

He was on the run after a gun battle with security forces at his home, where weapons and ammunition were discovered.