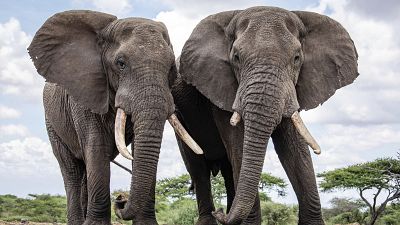 The Amboseli National Park in southern Kenya is seeing something of an elephant baby boom.

Last year, it welcomed around 200 calves, bringing its total elephant population in the 392-square-kilometer national park located 240 kilometers southeast of Nairobi along the border of Kenya and Tanzania to about 1,900.

And the trend is being reflected across the country with around 36,280 elephants, according to the Kenya Wildlife Census Report - a 12 percent rise in comparison to 2014.

Experts say it is partly down to a drop in poaching. According to Kenya Wildlife Service, the country saw a 96 percent drop in poaching last year with just 11 animals killed by poachers.

That's in comparison to 2013, when over 386 of the creatures were poached.

This improvement is mainly attributed to increased government initiatives combating the practice and the trafficking of trophies as well collaboration with international partner trying to put a stop to the illegal ivory trade.

But with a larger elephant population comes other problems.

"We have irrigation farms adjacent to the national park, and these farms, when elephants go out, they get into these farms and crop raid," he says.

That's why rangers are collaring some of the animals, including this female elephant. They'll now be able to track her movements across the park.

"We should be able to monitor in real-time the movement between this park and also the conservancies and be able to easily intervene on issues of human-elephant conflict and security interventions," explains Omondi.

Due to its reliance on international tourists visiting parks to glimpse their wandering herds, the sector has been devastated by the COVID-19 pandemic.

In a bid to raise funds and boost conservation efforts, Kenya Wildlife Service and the Ministry of Tourism has organised a rare "Tembo" (Kiswahili for "Tusks") naming festival.

"We felt that there's an opportunity for people to not only contribute to it but also to be part of the process by naming an elephant," explains Betty Radier, chief executive of Kenya Tourism Board.

"And therefore, you literally adopt an elephant, and this becomes your adopted child, an elephant."

At the event, several stakeholders, including conservation groups, have selected and adopted an elephant after donating to the cause, some around $5,000.

At the ceremony, 20 elephants get new adoptive parents, giving them names including Magical Kenya, Minti, and Rahachameleon.

"Tourism is about travel and movement and people meeting each other and interacting. With the pandemic, that was not possible," says Radler.

"What therefore an initiative like this does is it helps open up the destination from an area of interest, but also, it looks at an area we possibly in the past have not really talked about, but Kenya is strong for, which is conservation."