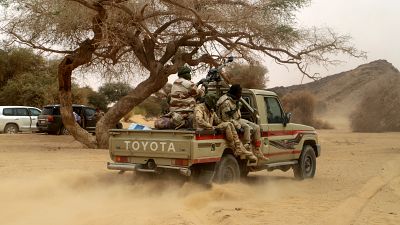 Since 2017, jihadist groups have rocked the Tillaberi region, a vast area covering 100,000 square kilometres (38,000 square miles) near the borders with Mali and Burkina Faso.

The flashpoint area is frequently targeted by the Islamic State in the Greater Sahara and the Al-Qaeda-affiliated Group for the Support of Islam and Muslims.

"There was an attack on a border checkpoint at Petelkole," an elected official from Tillaberi said.

Another official who visited the site later said the body of a third policemen had been found.

Petelkole is a western border post located merely 10 kilometres from Burkina Faso, which is also facing a wave of jihadist attacks.

The first official said the attackers burnt two vehicles and took away weapons.

According to a municipal worker armed men on motorbikes had tried to attack the post on Saturday afternoon but fled after the police fought back.

In May 2017, two policemen and a civilian were killed at the same post.

Niger, a vast landlocked state also bordering Nigeria and Benin to the south, Algeria and Libya to the north and Chad to the east, on Friday opened its first military school in the capital Niamey to train future officers.

President Mohamed Bazoum said his country, notably as a neighbour of troubled Libya, had to act on security needs given its position at the heart of a region prone to terrorist activity.

Bazoum is currently in Burkina Faso trying to coordinate the military fightback against jihadists in the region by the armies of Niger, Burkina Faso and Mali.

"We need to help each other to face the challenges we are confronted with, especially terrorism," Bazoum said during a meeting with his Burkinabe counterpart Roch Marc Christian Kabore.

He said the "terrorist attack" at Petelkole underscored "the need for joint action" and for sub-regional cooperation to combat the threat.