Burkina Faso's former president Blaise Compaore, the main accused in a long-awaited trial on the 1987 assassination of his predecessor Thomas Sankara, will boycott the upcoming proceedings, according to his lawyers .

In the trial opening on Monday, Compaore and 13 others face an array of charges in the death of Sankara, a charismatic revolutionary followers describe as the African Che Guevara.

Compaore’s lawyers, said the military tribunal was an exceptional court that lay outside common law. They believe Compaore has immunity as a former head of state.

Pierre-Olivier Sur, one of his lawyer call the trials "a shame trial".

"We have not even been notified of the procedure, we have not received any indictment, nor any statement of charges, nor any expert opinion, nor any testimony, nothing. We weren't able to fight this procedure, which is why we consider that this is not a trial, it is a shame trial."

"This is a political court, simply because it is not a court of common law, it is not the judicial court or the high court or a criminal or correctional court with a jury that will judge him, it is a military court, presided over by a magistrate surrounded by army colonels. And this is all the more shocking because President Blaise Compaoré should benefit from immunity due to his position as former head of state as provided for in Article 168 of the Constitution of Burkina Faso" he added.

Compaore was himself forced from office in 2014 by a popular uprising – after 27 years in power – and fled to the Ivory Coast, where he obtained Ivorian nationality. 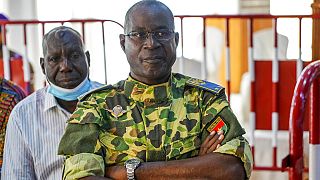