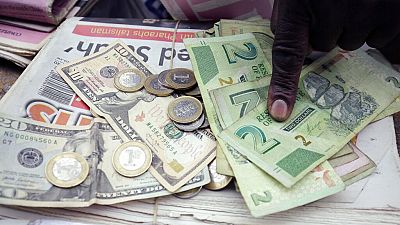 Zimbabwe's central bank has frozen the bank accounts of 30 people accused of illegally exchanging foreign currency through mobile phones and social networks, it said on Tuesday.

The Reserve Bank of Zimbabwe said in a statement on Tuesday it had identified 30 people "abusing mobile telecommunication services and other social media platforms" for "illegal foreign exchange transactions and money laundering".

Their accounts have been frozen and they are now banned from banking for two years. They also face being blocked by telephone operators.

The Zimbabwean government has been trying to promote the local currency since it was temporarily abandoned in 2009 in favor of the US dollar due to hyperinflation.

Faced with a lack of liquidity, the country printed new notes in 2016.

The local currency has continued to lose value and foreign currency is traded on the black market at cheap rates.

Zimbabwe is still reeling from decades of mismanagement during the Mugabe era. The southern African country has been in a severe economic crisis for years. Many Zimbabweans have watched helplessly as prices have soared and their savings have gone up in smoke.

Industry and exports have plummeted, while foreign currency is becoming scarce.