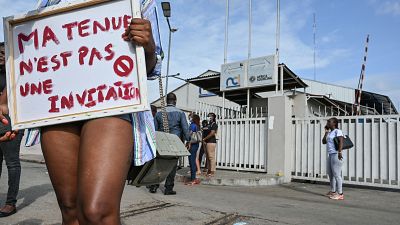 In Ivory Coast, the fight for women's rights is gaining ground. For several weeks, testimonies of women who were victims of assault or rape have been on the rise.

A women's rights group, the Ivorian Women's Defence League, is now calling for a change in Ivory Coast.

"There are many victims who come to us to file complaints. There are many fathers who dare to denounce rape against their little girl. There are many women who dare to say that they want to go to court, which shows that the work that is being done is recognized and has weight," Boho Meganne, the president of the Ivorian Women's Defence League said.

A recent talk show on a rape convict in the Ivory coast shocked many viewers especially women in the country.

This talk show involved a host and a rape convict talking about their experiences detailing how he orchestrated the act drawing massive condemnation countrywide.

The show attracted a massive protest especially from Ivorian women calling for stun action to be taken against the presenter and the rape convict.

"The day of the scandal our mailbox was full of people, women who came to testify, who said that this scene opened wounds they thought they had forgotten," Boho Meganne, the president of the Ivorian Women's Defence League said.

The association later mobilized and collected over 40,000 signatures and the prosecutor took charge of the case and the presenter is sentenced to 12 months suspended prison sentence.

The movement has already gone beyond the borders of the country. The women's defense league has appeared in recent months in Benin, Chad and Mali.