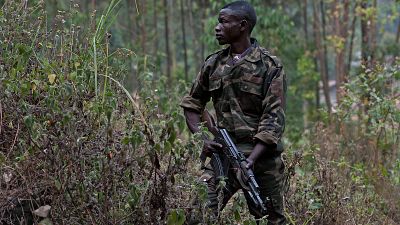 More than 1,200 civilians have been killed in the restive DR Congo provinces of Ituri and North Kivu so far this year and millions of people now need humanitarian aid in the eastern region, the UN refugee agency said Friday.

Democratic Republic of Congo authorities declared a state of siege in May, an exceptional measure aimed at ending the reign of terror by armed groups operating in the region, most notably the Allied Democratic Forces (ADF), a group linked to the so-called Islamic State.

The UN High Commissioner for Refugees (UNHCR) and its partners, recorded "more than 1,200 civilian deaths and 1,100 rapes this year" in the two most affected provinces of North Kivu and Ituri, UN refugee agency spokesman Boris Cheshirkov told reporters in Geneva

"Attacks attributed to the Allied Democratic Forces (ADF) armed group have increased in brutality since late 2020, and the frequency of killings of civilians has not abated despite the state of siege," the UN refugee agency added.

Members of civil society blamed the killings on the ADF, considered the deadliest of scores of armed militias that roam the mineral-rich eastern DR Congo.

The UNHCR has "recorded 25,000 human rights abuses this year. In total, more than a million Congolese have been internally displaced in the east of the country in 2021," Cheshirkov said Friday.

The UN agency also highlighted the need for a steep increase in humanitarian funding for the area.

"Less than four months from the end of the year, we have received just 51 per cent of the US$205 million required in 2021 for the operation in DRC."

According to the Kivu Security Tracker (KST), a respected US-based monitor of violence in the region, the ADF has killed 642 people in Ituri and North Kivu since January.

Congolese Nobel laureate Denis Mukwege on Friday called for an international criminal court for the Democratic Republic of Congo (DRC), whose eastern provinces have been wracked by armed groups for a quarter of a century.

In a statement issued in the runup to the annual UN General Assembly in New York, Mukwege said impunity for brutal crimes was entrenched and local people lived "in fear and horror."

Despite the regional state of siege imposed in May, "the security situation in these provinces does not seem to be improving," said Mukwege, a gynaecologist based in the eastern DRC.