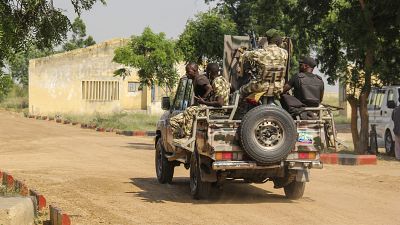 Nigerian local authorities have extended a telecom shutdown in northwest Zamfara state to a neighbouring state as part of an ongoing military crackdown on gangs behind a series of mass kidnappings, an official said Friday.

Nigerian security forces in Zamfara last week began one of their largest recent operations against the armed gangs, known locally as bandits, in an attempt to halt the surge in violence.

Looking to disrupt the armed groups' communications, the country's telecoms regulator also ordered operators to shut their towers in Zamfara as the military began raids and air strikes on bandit hideouts.

A security aide to Katsina State Governor Aminu Bello Masari said telecommunication services were now also shut in 13 of that state's 34 districts on the border with Zamfara.

"The shutdown is meant to stop bandits from Zamfara moving into Katsina state to use telecom services for their terrorist activities," Ibrahim Ahmed Katsina said.

"For now the shutdown affects 13 local governments to aid ongoing security operations but we will not hesitate to expand the shutdown where necessary," Katsina said.

Northwest and central Nigeria have long been plagued by criminals gangs who raid communities, stealing cattle and kidnapping residents for ransom after looting and burning homes.

But the violence has escalated this year and bandits have turned their sights on schools and colleges to abduct hundreds of pupils in a series of mass kidnappings.

Hundreds of troops aided by gunships and fighter jets launched offensives on Saturday on bandits camps in the Shinkafi area of Zamfara state, security sources have said.

Following the telecoms shutdown Zamfara residents have been trooping to Funtua in Katsina state to make phone calls and bank transactions, which have also been disrupted.

Gunmen presumed to be from Zamfara kidnapped more than 20 people on Wednesday in a village on the provincial border in neighbouring Sokoto State, police said.

On Thursday six people were killed and seven more kidnapped in a pre-dawn raid by bandits on Tureta town in Sokoto, Muhammad Sadiq Abubakar, the state's police spokesman told AFP.

On Wednesday locals in Bakori town in Katsina state arrested a bandit fleeing with his family from Zamfara, according to local residents.

Past military campaigns and amnesty deals with bandits sought by local governors have failed to end the attacks.

Under pressure over worsening insecurity in Nigeria, President Muhammadu Buhari has ordered security chiefs to find urgent ways to curb violence in the northwest even as they battle a 12-year jihadist insurgency in the country's northeast.

The Nigerian army said Thursday that its troops have arrested a high-profile member of the Boko Haram extremist group in northern Borno State, where the rebels' 12-year insurgency is concentrated.

Army spokesman Onyema Nwachukwu said Yawi Modu was detained along the Damboa-Wajiroko road, a notorious route where both the extremists and Nigerian troops have recorded casualties over the years.

Nwachukwu said the army also raided two locations in Borno and a neighboring area where improvised explosive devices materials were made. The sites were believed to have been used by Boko Haram and its breakaway faction Islamic State in West Africa Province (ISWAP).

He did not provide further details regarding the operation, other than saying 251 bags of Urea fertilizer used in making explosives were also recovered and “two notorious Boko Haram terrorists" arrested.

In some parts of northeast Nigeria, authorities have banned the importation of Urea fertilizer, citing its use by extremists in making bombs.

The reported arrests come a week after the army said nearly 6,000 members of the jihadi group surrendered in the northeast, marking one of the largest defections since the insurgency began there 12 years ago.

Nwachukwu said the “obvious depletion” faced by the extremists is making them to be “desperately acquiring IED materials to make explosive devices with which to unleash terror on innocent civilians.”

The United Nations Development Program estimates that the conflict has resulted in the 350,000 deaths, with 314,000 of those from indirect causes.