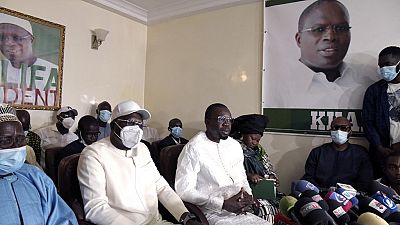 Several movements of the Senegalese opposition launched Thursday in Dakar a coalition led by the main opponent Ousmane Sonko, five months before the staging of local elections.

The coalition, called "Yewwi askan wi" (liberate the people in Wolof language), aims, according to its initiators, to conquer the municipal and departmental councils, controlled in their quasi-totality by the presidential coalition since the elections of March 2014.

The local elections, initially scheduled for 2019, are to be held in late January 2022. They are to be followed by legislative elections in the same year, 2022. The presidential coalition also controls parliament with a majority of MPs.

The new coalition, made up of some 20 parties and movements, will "present a common list in each commune and department and continue this collaboration until the 2024 presidential election," said one of its leaders, Ngone Salih Diop.

It brings together, in addition to Ousmane Sonko, several leaders including the former mayor of Dakar Khalifa Sall and an influential religious leader.

Ousmane Sonko, a member of the National Assembly, remains the target of accusations of rape by an employee of a beauty salon in Dakar where he was getting a massage to relieve a backache.

He refutes these accusations, which he attributes to a plot hatched by President Macky Sall to remove him from the political scene.

His arrest in early March triggered rare violence in Senegal that left several people dead. He has since been under judicial supervision.

Meanwhile, President Macky Sall, elected in 2012 and re-elected in 2019, maintains vagueness on his intentions for 2024.

Khalifa Sall (with whom he is not related), who was elected mayor of Dakar in 2009 and re-elected in 2014, had been removed from office by President Macky Sall after his conviction in August 2018 to five years imprisonment for "forgery of commercial writing and fraud involving public funds".

His candidacy for the presidential election of 2019 had been rejected by the judiciary, because of his judicial conviction.

The new coalition was initially intended to bring together a larger number of opposition groups, including the PDS, the former ruling party (2000-2012), still led by former President Abdoulaye Wade.

The PDS finally gave up being a member because of "points of disagreement (which) have not been resolved," he said in a statement, without further details.