Why Africa Must Invest in Science {Business Africa}

What is COP26 and why is it so important?

Local polls a test for the future for South Africa's ANC

Filipinos flock to cemeteries ahead of All Saints' Day closure

Strengthening the Role of NOCs in Africa: Sonangol Confirms Participation and Diamond Sponsorship at African Energy Week in Cape Town

Leading forest scientists call for a freeze on new logging in the Congo, urge governments to act

The Intergovernmental Panel on Climate Change (IPCC) warned Monday that already, greenhouse gas levels in the atmosphere are high enough to guarantee climate disruption for decades if not centuries. This is already taking its toll on Malawi 's second largest lake, Lake Chilwa.

Thousands of people in Malawi depend on the country's second largest lake, Lake Chilwa, to make a living. Professor Sosten Chiotha, Regional Director of Leadership for Environment and Development (LEAD), says that climate change has introduced "extremity in weather", resulting in less rainfall and abnormally low water levels in the lake.

"Water variations are normal however the connection with climate change is that the factors that drive the drying are actually periods of low rainfall. In our project, the Lake Chilwa Climate Change Adaptation project, we actually elaborated that if you have three consecutive rainy seasons, with rainfall below 1,000mm, then the lake is likely to dry. "

According to Professor Sosten Chiotha, Records show the lake has dried completely several times in the last 100 years... according to published literature, it was a cycle of 20 to 25 years, From the 1990s, the frequency of the drying has increased and this is connected to the impacts of extreme weather events typical of climate change.

"Climate change has introduced extremity in weather. So, we are having more dry spells and that is why the lake seems to be drying more frequently than it used to in the past. So, the current drying is not normal. The current fluctuations in water levels is not normal and that is because of the extremes in the rainfall."

One-and-a-half million people live in the areas on the Lake Chilwa basin, which is one of the most densely populated areas in southern Africa.

The Intergovernmental Panel on Climate Change (IPCC) report that generated shock waves on Monday is the most detailed assessment of climate science ever undertaken, advancing our understanding of how -- and how fast -- greenhouse gas emissions are changing the planet.

But experts caution that the comprehensive global review contains blind spots -- overlooking regions that are highly vulnerable to the impacts of climate change but where data on those impacts is severely lacking.

In its 40-page Summary for Policymakers, the IPCC presents three maps of the world, with regions divided up in to hexagons.

Each of the maps shows observed changes in extreme heat, rainfall and drought.

While there is a strong observed increase in extreme hot weather nearly everywhere, when it comes to rainfall and drought, South America, Africa and the Pacific Island states in particular are nearly blank slates.

Of the seven sub-regions of South America, only one -- the southeast -- has reliable rainfall data, and just one other -- the northeast -- has sufficient data on drought.

"It's important to mention that we can only use and assess the available literature," Paola Arias, associate professor at Colombia's University of Antioquia and an IPCC author, told AFP.

"South America has a very important role in regional climate but also an important source of moisture to Central America," said Arias, who helped design the three maps.

"We need more observational data. We don't have enough of it to study extreme events on a daily or hourly scale."

The IPCC provided a two-page fact sheet on observed and projected climate trends in Africa, but the paucity of data is inescapable in the maps.

Of the nine African sub-regions, the IPCC noted an observed increase in extreme rainfall for just two -- western and eastern southern Africa.

For the other seven it said "limited data and/or literature" were available.

Only half of the sub-regions provided sufficient data to determine an increase in rates of drought.

Mohamed Adow, director of the Nairobi-based climate and energy think tank Power Shift Africa, likened the lack of data to the old philosophical adage: If a tree falls in a forest and no one is around to hear it, does it make a sound?

"People in Africa are certainly aware of the overwhelming heat, rising seas and extreme weather on the continent, but if they are not being recorded by scientists it will be much harder for African voices to be heard in the climate debate to tackle it," he told AFP.

The IPCC report makes it crystal clear that "human activities" were responsible for the 1.1C of warming above preindustrial levels observed so far.

But Adow underscored a basic injustice: most climate-vulnerable nations are virtually blameless for the emissions that are driving ever more extreme weather.

"Africa is most affected and yet least responsible for climate change," he said.

"Sadly, it's also producing the least scientific research, and this lack of research is hurting the region's ability to adapt.

"We need to urgently address this and ensure researchers and funders come together and invest in filling these glaring gaps in climate research."

Although more than half of the IPCC's report authors were first timers, their composition is still imbalanced, both geographically and in terms of gender.

Of the 116 authors credited with drafting or contributing to the report's summary, just 13 come from non-G20 nations, for example.

And the overall writing team is 72 percent male.

Maisa Rojas Corradi, coordinating lead author of the IPCC report's opening chapter and director of the Centre for Climate and Resilience Research in Chile, said efforts had been made to make this team more diverse.

"I know that this was a worry that was actively worked on when the author team was selected, they really tried to have more women and more regional representation," she told AFP.

Corradi said there were still too many obstacles stopping research conducted in regions where climate change is already hitting hard.

These include studies not written in English or not published in mainstream scientific journals, she said.

"If you live in a country where the scientific community is small or some aspects aren't being investigated comprehensively, then the IPCC can't really say anything."

And better representation within the IPCC author team is not just a case of equality: bringing in more data and regional perspectives will foster better scientific outcomes, Corradi said.

"It's critical to get a balanced report," she said. "You cannot monitor what you don't observe." 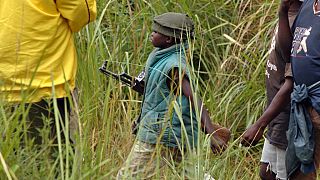