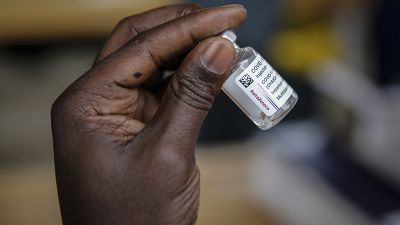 The United Kingdom said Wednesday it was offering 817,000 coronavirus vaccine doses to Kenya, as it rolls out a promised 100 million jabs for global distribution by next June.

Prime Minister Boris Johnson will formally agree the donation when he meets Kenyan President Uhuru Kenyatta at the UK leader's country retreat at Chequers, northwest of London, later on Wednesday.

The pair are due to host a fundraising summit in London on Thursday -- attended by other world leaders as well as business, charity, education and youth representatives -- focused on global education efforts.

Around half of the donated Oxford-AstraZeneca vaccine doses will be dispatched to Nairobi this week, Downing Street said ahead of the meetings.

"As friends and allies, we are sharing UK vaccine doses to support Kenya’s fight against the pandemic," Johnson added in a statement.

"From boosting economic growth to addressing climate change and getting girls into school, the UK and Kenya are working hand-in-hand to deliver a more secure and prosperous world."

Britain has committed to sharing 100 million Covid-19 vaccine shots by the middle of next year through the Covax programme, which aims to ensure fair distribution of jabs, and directly to individual countries.

The commitments stem from G7 pledges, unveiled at a UK-hosted summit in June, to provide at least one billion doses internationally through sharing and financing schemes.

The United States has said it will donate 500 million jabs to 92 poorer nations, while European Union members have agreed to donate at least 100 million by the end of 2021.

Richer countries, in particular Britain, have faced criticism for failing to start donating to poorer countries which are lagging far behind in their vaccination drives.

The UK has fully jabbed more than 70 percent of adults, and the government lifted all remaining pandemic curbs on day-to-day life in England last week.

Daily infection rates in Britain appear to be in decline -- boosting hopes of a strong economic recovery.

"I'm very pleased that this is a country that now has the highest proportion of vaccinated adults of any country in the world," Johnson told LBC radio, in an interview recorded Tuesday.

The International Monetary Fund on Tuesday forecast that Britain's economy would grow by 7.0 percent this year, the joint fastest of any G7 country alongside the United States.

But the IMF also warned that the uneven distribution of vaccines is widening disparities as rich countries pick up speed and leave developing nations behind.