President Ali Bongo Ondimba on Friday called for the support of MPs and senators not to let Gabon's "unity" disintegrate, in his first speech to parliament in five years and two years and eight months after a serious stroke.

His last address to the Congress of the two chambers, largely dominated by his party since he became head of state in 2009, was in June 2016, two months before his re-election, which was heavily contested by the opposition.

And while he has been making televised speeches and public appearances for the past year, this was the first time he had given a speech broadcast live by the national media since a stroke on 24 October 2018, which kept him away for nine months from a country that was then undergoing a shoddy attempted military coup and the rise of an all-powerful chief of staff, who eventually fell from grace and was jailed for embezzlement.

His long absence had allowed all the rumours to flourish, including his death, and the opposition and civil society denounced a de facto seizure of power by this director of cabinet, the Franco-Gabonese Brice Laccruche Alihanga, arrested and imprisoned since December 2019.

"In a 15-minute speech, Mr Bongo made general remarks and recalled the actions taken by his government and the laws passed over the past two years, but without any concrete announcements.

"To complete this vast movement that we have initiated, I resolutely need your support and your confidence," he said to the deputies and senators who gave him a long standing ovation.

"I have to make difficult choices on a daily basis", he said, referring to the very strict measures taken over the past year to combat Covid-19, in particular a curfew that is now dragging on and is strongly criticised. But "we can congratulate ourselves, Gabon is often cited as a reference on the continent for its rigorous management of the health crisis," said the head of state.

Gabon has so far officially recorded less than 25,000 positive cases of Covid-19, 159 deaths and, today, has 290 active cases for a population of less than two million inhabitants. The curfew is maintained despite these low figures.

Ali Bongo Ondimba, 62, was elected in 2009 after the death of his father Omar Bongo, who had ruled the small oil-rich central African country for nearly 42 years. He was re-elected in 2016. 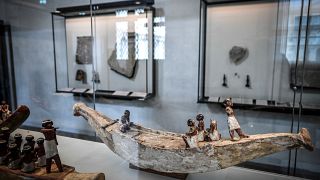