Zimbabwe is hoping for economic rebound this year as Finance Minister Mthuli Ncube expects the economy to grow by 7.8%.

For two consecutive years, the country’s economy has been shrinking. Even before the pandemic hit, Zimbabwe’s economy had contracted by 6% in 2019.

This is partly because of natural disasters like cyclone Idai and a devastating drought that battered Southern Africa.

Despite this, the Zimbabwean Finance Minister is optimistic about a rebound.

"The economy is fixable; we are fixing it. Just check our track record in the last two and a half years. The government has introduced a new currency, which didn't exist before. Every country needs its own currency so as to have monetary policy to supplement what's happening on the fiscal side’’, Ncube said.

He came into office after the disputed 2018 general election, when Zimbabwe faced foreign currency and cash shortages, including an unsustainable budget deficit, difficulties in re-engaging with international lenders and investors after the Robert Mugabe regime.

The minister said the government had been engaging creditors and has begun repaying its $8.0 billion external debt.

We even managed to balance the budget. We have begun payments, token payments, to the World Bank and the AfDB (African Development Bank) and European Investment (Bank). We have started. We have also expressed that we desire to begin payments, no matter how small, to the 17 Paris Club members that Zimbabwe owes money to. We want Zimbabwe to be known as a good debtor, not a bad debtor", Ncube said.

The IMF projects growth of 3.1% for Zimbabwe's economy. 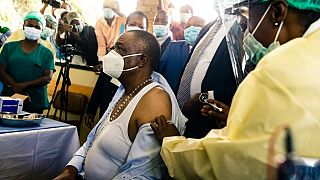 Zimbabwe: Huge demand for Covid-vaccines but there is a shortage

Zimbabwe: Huge demand for Covid-vaccines but there is a shortage