South Africa has set itself an ambitious target to vaccinate five million people against Covid-19 who are over the age of 60 by the end of June.

It comes as the country is on the cusp of the third wave of Covid-19 infections and there have been many delays in administrating vaccines.

South Africa is the continent's worst-hit country by coronavirus and has registered more than 1.6 million cases and more than 55,000 deaths.

But less than 480,000 people, or just one percent of its population, mainly health workers, have been vaccinated.

Among the first seniors to receive their vaccinations under the mainstream campaign was 89-year-old Nobel Peace Prize winner and retired archbishop Desmond Tutu.

The vaccine drive started in February when South Africa became the first country in the world to administer inoculations by US pharma group Johnson & Johnson, but it has moved slowly.

The government has been widely criticised for the sluggish pace of the campaign. But it says it has ordered enough doses to vaccinate at least 45 million of the estimated 59 million population.

The government says it expects to have received 4.5 million doses of Pfizer and two million J&J doses in the next six weeks.

South Africa and India are leading a global campaign to waive intellectual property rights for Covid-19 vaccines so that any country can produce vaccines, with poor countries so far lagging behind in the vaccination rate.

Why has the vaccine rollout been slow?

South Africa earlier this year purchased AstraZeneca vaccines and then sold them to other African countries over fears that they would be less effective.

Then, after it started inoculating healthcare workers with the J&J jabs, it had to pause for two weeks in mid-April to vet risks over blood clots that had been reported in the US.

The "phase two" rollout is being conducted at 87 vaccination sites using the Pfizer formula.

Health Minister Zweli Mkhize said the vaccinations would start "fairly slowly" but be ramped up towards the end of the month "because we are starting off with a new vaccine we have never used before."

After a brief lull, infections climbed by as much as 46 percent between the last week of April and the first week of May.

Some experts blame the backlog in the rollout for the jump.

"If we had the vaccine rolled out much earlier that would have helped," said medical professor Nombulelo Magula, who serves on the Covid-19 ministerial advisory committee.

Meanwhile, President Cyril Ramaphosa has slammed the shortfall of vaccines.

"A situation in which the populations of advanced, rich countries are safely inoculated while millions in poorer countries die in the queue would be tantamount to vaccine apartheid," he said last week. 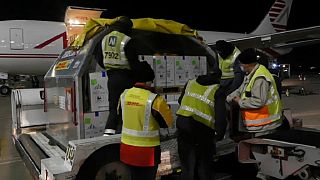