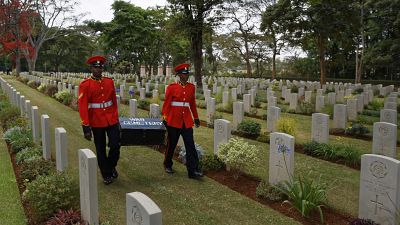 The British government and the Commonwealth War Graves Commission have apologized after an investigation found that at least 161,000 mostly Africans and Indians who died fighting for the British Empire during World War I weren’t properly honored due to “pervasive racism.”

The investigation found that at least 116,000 people — and possibly as many as 350,000 — were either not commemorated by name or weren’t commemorated at all, according to findings released Thursday. In addition, between 45,000 and 54,000 other casualties were “commemorated unequally.”

“We apologize unreservedly for the historical wrongs found in this report and for failing to live up to the founding principle of `equality of treatment in death,’” the commission said after the findings were released.

Defense Secretary Ben Wallace apologized Thursday in the House of Commons and expressed “deep regret” for failures to properly commemorate Black and Asian service personnel who died fighting for the British Empire.

The commission appointed a committee to investigate claims of unequal treatment of war dead following a 2019 TV documentary presented by David Lammy, a lawmakers from the opposition Labour Party. The commission oversees the graves of more than 1.7 million service personnel from the former British Empire who died during the two world wars.

“No apology can ever make up for the indignity suffered by the unremembered,'' Lammy said. “However, this apology does offer the opportunity for us as a nation to work through this ugly part of our history — and properly pay our respects to every soldier who has sacrificed their life for us.”

Professor David Olusoga described the failure to properly mark the soldiers' sacrifice as “one of the biggest scandals I’ve ever come across as a historian.'' He told the BBC that the most appalling war Britain has ever faced and that part of its impact was “the power of the way those who fell were memorialized.''

“When it came to men who were black and brown and Asian and African, it is not equal, particularly the Africans who have been treated in a way that is, as I said, it’s apartheid in death,'' he said. “It is an absolute scandal.''