A real estate dream that is in taking water, Congolese investors at open war against the French manager of a company established in Bermuda: ten years after its launch, the Cité du Fleuve marks the failure of a high-end urban housing project.

The promoters of the Cité du Fleuve promised at its launch ten years ago a "haven of peace" away from the urban chaos of the capital of the Democratic Republic of Congo (DRC), the largest city in French-speaking Africa with an estimated population of at least 10 million.

Planned to be built on 25 km2 on land reclaimed from the Congo River, the houses and small buildings served by pretty alleys with lampposts were to be a kind of small "Dubai of Kinshasa", affirmed a promotional video of 2015, speaking of the "most beautiful city in Africa".

Rumba stars, bankers, businessmen, busy politicians: the nouveau riche have invested in apartments and villas, away from the working-class district of Kingabwa.

A constantly growing megalopolis, Kinshasa offers a hyper-contrasting real estate landscape, commensurate with the huge income gaps between the majority of the population and a handful of well-off. Millions of families survive in cramped homes exposed to flooding, water and electricity cuts, poorly served by rutted roads.

But at the same time, high-rise residential towers of more than 20 floors, luxury residences, are emerging from the ground in the residential district of Gombe, by the river, with striking views over Brazzaville.

La Cité du Fleuve, which was at the forefront of this surge of high-end real estate fever ten years ago, was initiated by Mukwa Investments, a company registered in the Bermuda tax haven, managed by the French Robert Choudury.

Strictly speaking, the built project quickly took water, with regular flooding during the rainy season, as in December 2020. At the start of 2021, around ten unfinished construction sites are surrounded by weeds.

Frogs and toads splash around in rainwater-filled pools. On the site, bins are overflowing, to the delight of the seagulls.

In some apartments, traces of humidity are visible with mold on the walls and ceiling. The complaints of the inhabitants are in unison: "nothing is right here, even the water flowing in the taps is unfit for consumption", "the electricity costs double the tariff of the Snel (national electricity company ) ", _" I can't take it any longer ... "_ The president of the property managers' trustee, Serge Kasanda, deplores the depreciation of property. "Rents that used to cost $ 2,500 are now at $ 1,000 and even less."

The 56-year-old Congolese businessman denounces delivery delays. "I bought an apartment for 185,000 dollars in November 2018 which should be delivered to me three months later, but so far it has not yet been delivered to me." The trustee sent a "memo" to the President of the Republic in February to denounce the water unfit for consumption, the problems of garbage disposal, estimating that it needed $ 50 million to repay the debts, rehabilitate the site and buildings and develop new spaces by backfilling.

The owners have demanded the arrest of French manager Robert Choudury, whom they accuse of all their ills. Joined by AFP in South Africa, he accuses the Congolese in return of being bad payers.

At the end of 10 years, out of a total of 450 apartments, "only 15% of customers paid the full amount immediately in the weeks following the signing of the contract. 65% of people paid in six years instead of two years (as agreed), and 20% of people have never finished paying, "he defends himself.

"I lost four million dollars in ten years" to cover the electricity supply, adds the French businessman, accusing "generals and ministers who refuse to pay". He acknowledges that there are "30 undelivered apartments, but 18 are in the process of being finished." The businessman claims to have "signed an agreement with Chinese partners" to take over the Cité du Fleuve project without further details.

And announced a similar project to the City of the River in Lubumbashi, the economic capital of the country in the south-east. 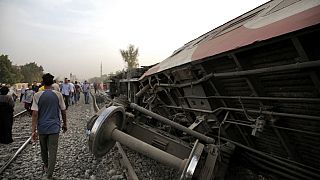