The Senegalese judiciary has refused a request for the release of former Chadian president Hissène Habré, sentenced to life imprisonment by an African court in Dakar for crimes against humanity, his lawyers said on Sunday.

He was sentenced on May 30, 2016, to life imprisonment after an unprecedented trial in Dakar, after being found guilty of crimes against humanity, rape, executions, slavery and kidnapping.

A Chadian commission of inquiry put the number of victims of repression under the Habré regime at 40,000.

Overthrown in 1990, the former Chadian president found refuge in Senegal, where, under international pressure, the conditions for his trial were created.

He was arrested there in 2013 and charged by a special court set up in cooperation with the African Union. Since his conviction, he has been serving his sentence in a prison in Dakar.

His lawyers filed a "request for permission" for his release on March 29, a request addressed to the judge in charge of enforcing sentences at the Dakar high court.

"A refusal was made to this request," said in a statement received Sunday by AFP his lawyers Ibrahima Diawara and François Serres.

"The reasoning used to refuse permission is that the issue of health is the responsibility of the direction of the prison administration" while "it is well taking into account the health risks that the first permission was granted by the same judge," they said. They denounced a "rule of law (...) with variable geometry".

The former Chadian leader was granted a 60-day leave of absence from prison by the Senegalese justice system on April 7.

The judge in charge of enforcing sentences had justified his decision by the fact that Mr. Habré was "particularly vulnerable to this coronavirus" and the need to make room in his prison, which was chosen to quarantine prisoners at the beginning of their detention. Habré returned to his cell after 60 days in early June.

"This is only justice," said Kaltouma Deffalah, a victim of Habré's regime, quoted in a Human Rights Watch statement.

"The man who enslaved me must serve his sentence according to the law. We are still waiting for Hissène Habré to stop hiding his money and pay us the compensation ordered by the court," she added in the same statement.

The court that sentenced Habré also awarded 82 billion CFA francs (about 125 million euros) in compensation to more than 7,300 victims who are still demanding to be compensated. 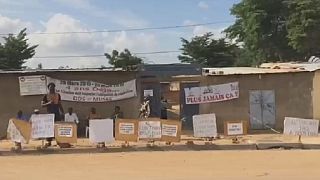 Chad: "We do not recognise the CMT" - Wakit Tama

Chad: "We do not recognise the CMT" - Wakit Tama