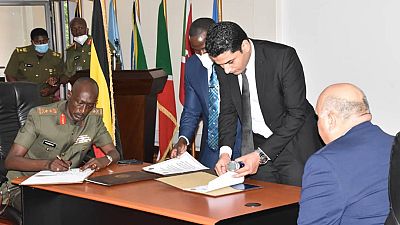 Egypt and Uganda have signed a memorandum of understanding on military intelligence sharing, Ugandan officials said Thursday, amid growing tensions over a mega-dam built by Ethiopia on the Nile River.

The text, signed Wednesday evening by the head of Ugandan military intelligence Abel Kandiho and the number two of Egyptian military intelligence, General Sameh Saber El-Degwi, provides that the two agencies exchange information including "to combat terrorism," a spokesman for Uganda's Ministry of Defense told AFP.

"Given that Uganda and Egypt share the Nile, cooperation between the two countries is inevitable because what affects the Ugandans will affect Egypt in one way or another," said Sameh Saber El-Degwi, quoted in a statement from the Ugandan army.

The agreement between two Nile basin countries comes in a context of high tensions between Egypt and Sudan on the one hand, and Ethiopia on the other hand about a mega-dam built by Addis Ababa on this river.

In recent weeks, Egypt has issued numerous warnings about the "Great Renaissance Dam" (GERD) being built in northwestern Ethiopia, on the blue Nile, which joins the white Nile in the Sudanese capital Khartoum to form the Nile. Uganda is crossed by the White Nile.

President Abdel Fattah al-Sissi on Wednesday repeated to his "Ethiopian brothers" to "not (touch) a drop of Egypt's water because all options are open," after Ethiopia announced it would continue filling the GERD.

Since work on the dam began in 2011, Egypt and Sudan wanted a tripartite agreement on the operation of the dam before filling began. No agreement has been reached, and Ethiopia considers the filling to be an integral part of the dam's construction and cannot be delayed.

Addis Ababa says the hydroelectric power generated by the dam is vital to meet the energy needs of its 110 million people.

But Egypt, which depends on the Nile for about 97 per cent of its irrigation and drinking water, sees the dam as a threat to its water supply. Sudan, meanwhile, fears that its own dams could be damaged if Ethiopia proceeds with the full filling of the GERD before an agreement is reached.