Tunisian flim ''The Man Who Sold His Skin'' gets Oscar nomination

A movie titled ‘’The Man Who Sold His Skin’’ that spotlights the cruel absurdity of a system where objects can travel more freely than people, has earned Tunisia its very first Academy Award nomination.

‘’ The Man Who Sold His Skin’’, tells the story of a man who tattoos a European Schengen visa across his back as a living work of art, enabling him to cross international borders.

I'm very happy. I mean, it's huge what's happening. But for me it's really a way to be able to make my next films a little easier because it's not easy to make films. And I would like to reach the comfort that some directors have when they manage to edit their films quite easily", Ben Hania said.

‘’The Man Who Sold His Skin’’ shot in Tunisia, France and Belgium, is partly inspired by the real-life tale of a Belgian man, Tim Steiner, who sold the right to tattoo his back to an artist, Wim Delvoye, who makes a cameo in the film.

"It was the opportunity of a lifetime. Any actor dreams of having such a well-written role in such an ambitious film with such a wide range of emotion for the character. It wasn't necessary to convince me. It was up to me to convince her that I was Sam Ali instead", Mahayni said.

Like the Syrian refugee in the film, Ben Hania said she faced issues with getting her papers to travel to France. The characters in the story "resemble me, pushed to the extreme", she confided.

She regrets the lack of institutional support for cinema in Tunisia.

The film was co-produced with 25 international partners, including in Belgium, France, Germany, Sweden, Tunisia and Qatar, and shot by Lebanese cinematographer Christopher Aoun.

Raising the budget of $2.9 million was "a challenge", according to one of the co-producers, Nedim Cheikhrouha, who said the project almost collapsed a year ago due to lack of funds.

At the Academy Awards, "The Man Who Sold His Skin" has fewer promotional resources than other contenders, the producers said.

The partly dark satire, and romantic drama, is shortlisted in the International Feature Film category for the Oscars, and will be held on April 25.

Ben Hania’s previous films have already won awards, including "Beauty and the Dogs" about a young woman's quest for justice after being raped, and "Zaineb Hates the Snow", a documentary about a Tunisian teenager who migrates to Canada. 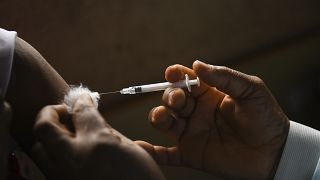 WHO: AstraZeneca vaccine is safe

WHO: AstraZeneca vaccine is safe