Student protests continue in Johannesburg after a passerby was killed when police fired rubber bullets to disperse protesters earlier in the day. Students were once again dispersed by the police while trying to block a crossroad near the University of the Witwatersrand. Students began sporadic protests in early January over the alleged exclusion of some students by a government-sponsored tuition aid scheme

A passerby was killed in Johannesburg Wednesday when police fired rubber bullets to disperse students protesting outside a top-tier South African university over tuition debts.

AFP journalists saw the body of a man lying on his back on the sidewalk covered with a silver-coloured safety sheet, just a street away from the University of the Witwatersrand (Wits).

"We condemn any form of violence and call on all persons to keep calm during this very difficult time," Wits said in a statement, adding that two students had been injured.

Several protesters were also arrested, while South Africa's police watchdog has launched a probe into the death of the 35-year-old man.

Clashes erupted when police used rubber bullets to break up a group of students who blocked roads with rubble, burning plastic trash bins and disrupting traffic in downtown Johannesburg around the Wits campus in scenes carried live on local news.

The students demanded that the university allow those in arrears on their fees -- some by up to $9,800 -- be allowed to register for the 2021 academic year.

Many students have fallen into arrears because of economic hardships caused by the Covid-19 pandemic.

A state-funded student financial aid scheme, which subsidises disadvantaged students and has in recent years been experiencing funding shortfalls, this week confirmed it could not guarantee paying out to first-time students.

Students have since January staged sporadic protests over the alleged exclusion of some 8,000 people with outstanding debt.

The university, one of the country's most respected academic institutions, enrols around 40,000 annually.

Witnesses described seeing students being chased by police just before the man fell down and died.

"Police started shooting. That man was just coming out of the building next door, it's a clinic, he got shot, just like that," said a woman who works at a nearby fast food outlet and declined to give her name.

"The police shot and they left," 23-year-old engineering student Thabang told AFP at the scene, adding he was "shot in the body and in the head".

"He wasn't even part of the protest, he was just getting out of (the) clinic," Thabang said.

Wits University spokeswoman Shirona Patel told AFP that "the protesters blocked a public road, the police tried to disperse them, and the passerby was shot in the crossfire".

Enraged students gathered near the body, singing apartheid struggle songs such as "we are fearful of this horrible place", with some shouting at police officers to leave the area.

"Kill all of us," one student was heard shouting.

Classes resumed last month at Wits, a prestigious university which was the epicentre of the #FeesMustFall protests that rocked the country some five years ago.

"Police have no respect for black lives. They kill black people with ease," Malema told reporters. 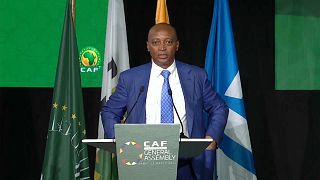