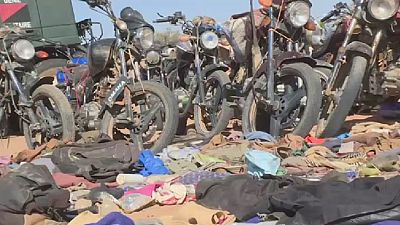 The death toll could be as high as 50, Burkina Faso’s national television reported Monday evening. It was the second attack in northern Burkina Faso in a week that has left dozens dead.

Meanwhile, the Norwegian Refugee Council warned that as many as 900,000 people could be displaced in the country by April, up from current estimates of 560,000.

Information about the latest violence in Silgadji in Soum province was difficult to obtain because the jihadists reportedly disabled the local phone network before the massacre near the country’s troubled border with Mali.

Extremist attacks are dramatically escalating in Burkina Faso, with deaths rising from about 80 in 2016 to over 1,800 in 2019, according to the United Nations. Burkina Faso’s military has struggled to contain the violence despite training and aid from the French and U.S. militaries in recent years.

Burkina Faso’s defense ministry is trying to recruit 2,000 more soldiers, and parliament has approved the use of civilian volunteers in the fight against extremism, a move that has concerned human rights groups.

Jan Egeland, secretary general of the Norwegian Refugee Council, said during a visit this week the country’s humanitarian needs are “enormous.”

“Insecurity and a lack of funding is severely hampering our work,” he said. “Donor governments have not understood that this is the world’s fastest-growing displacement crisis. We still see a small aid response in a huge human catastrophe.”