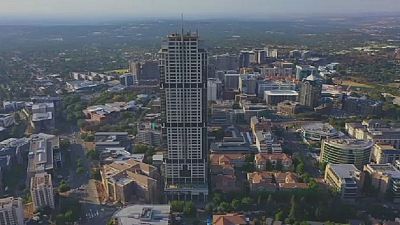 Meet The Leonardo. The new skyscraper is the tallest building in South Africa, according to the Council on Tall Buildings and Urban Habitat, an international ngo in the field of sustainable buildings and urban design.

With a height of 227.9 metres and 56 storeys, the building exceeds the Carlton Center by 223 metres, the council said.

The Leonardo is a mixed-use building with apartments and offices, and is still under construction, but already home to a restaurant.

The Dlamini family was one of the first customers of the restaurant housed in the Leonardo. Busi is impressed with the decor.

“They’ve also created some floating clouds over the restaurant that look gold. So really you feel like you are floating, because you are already on the seventh floor, very much elevated. So it feels like you are dining while floating around Johannesburg, which I think is incredible”, Dlamini said.

Despite the economic difficulties, the building is gradually attracting tenants. A sky bar with a 360-degree view of Johannesburg will soon be built on top of the tower.

According to one of promoters, the Legacy Group, the skyscraper overlooks “Africa’s richest area”, the financial hub of Johannesburg.

“Well Sandton has slowly been developing from the early 90s to now where it’s probably the richest square mile in Africa. So to have had the opportunity to do the largest building in that square mile is quite an accolade.”

For Bart Dorrestein, CEO of Legacy Developers ‘‘As a company, we firmly believe in South Africa’s future. We know that it’s the most relevant economy in Africa. And that this building, in that context, is going to make its mark. In how we’ve built it and how we’ve designed it, it was to be the ultimate lifestyle in one building.”

The tower includes a gym, a spa, a hotel and a restaurant. The construction of the building is not yet completed but it has almost been sold Half to South Africans and half to foreigners.

Located in Sandton, The Leonardo is the second highest building in Africa after the tower housing the great mosque of Algiers, which stands more than 265 metres high.