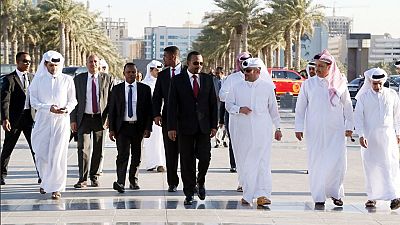 Abiy, who announced plans to liberalise the economy last year, hopes to attract foreign direct investment into several sectors that have been previously state-controlled.

While in Doha, Abiy visited the Museum of Islamic Art, where he toured the museum’s collection, which houses the masterpieces of Islamic art, including metal, wood, ceramics, jewelry, textiles, coins and glass.

Ethiopian Prime Minister signed the museum’s honorary book, noting the excellence of the Museum of Islamic Art with its holdings of Islamic civilization and culture. #QNA pic.twitter.com/cFl2qRYoPO

In January, the Ethiopian embassy in Qatar’s capital, Doha organised an investment forum, where opportunities for economic and trade cooperation in the two countries’ private sectors were discussed.

The Ethiopian delegation presented investment opportunities to Qatari businessmen in the sectors of agriculture, manufacturing, services, medicines, building materials and others.

An Ethiopian-Qatari business forum is expected to be organised later this year.

SUGGESTED READING: Qatar wants its piece of the African cake