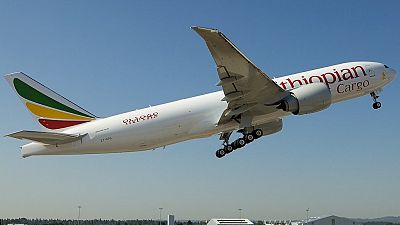 Ethiopian Airlines (Ethiopian) have announced a new route for its cargo services with a landmark route connecting Africa with South and North America, the airline said in a statement.

The twice weekly service will be to the Colombian capital Bogota from the Spanish city of Zaragoza with a stopover in the city of Miami in the United States.

The service commenced on August 29 and will be executed by their B777-Freigther. It is the latest addition to Ethiopian’s footprints which are very strong in the area of passenger transportation.

The Miami International Airport (MIA) also expressed excitement at the Ethiopian route which it said was between Addis Ababa and MIA describing it a route “creating the first cargo-only route between Africa and MIA.”

“With the new service, Ethiopian will carry Inditex high-end textile products from Zaragoza to the Americas. In line with our strategic roadmap, Vision 2025, we will keep on expanding our cargo destinations worldwide, thereby facilitating trade and economic growth among different regions of the world.”

According to Ethiopian, its “Cargo & Logistics Services currently serves over 44 international destinations in Africa, the Gulf, Middle East, Asia, the Americas and Europe, and boasts the largest trans-shipment terminal in Africa and one of the biggest ten in the world with an annual capacity of about 1 million tons.”

The airline is Africa’s largest Aviation Group and is also a SKYTRAX certified Four Star Global Airline. It bosses the air travel market and holds shares in over a dozen national airlines. It is a wholly government owned enterprise that is likely to undergo a level of privatization under new reforms being championed by Prime Minister Abiy Ahmed.