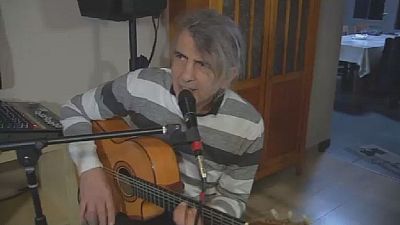 Basil Khalil was far from home when he arrived in Belgium as a refugee having fled the war in Syria in 2012, lived in Egypt and Turkey, and crossed the Mediterranean but his guitar has given him friendship and a sense of belonging.

The former music teacher played guitar on the streets of Istanbul and in muddy migrant camps of Serbia, where he sought to cheer up those around him with his songs.

In Belgium he got refugee status and it was music that overcame language barriers and helped him make friends such as Jean Davidts, who heard him play in a Belgian migrant camp and invited him to stay with him and his wife for a year.

I am happy that my children started attending school and are now getting accustomed to the life in Belgium and intend on staying in the country. As for the language barrier, they are gradually overcoming it and they even speak it better than I do.

“I am happy that my children started attending school and are now getting accustomed to the life in Belgium and intend on staying in the country. As for the language barrier, they are gradually overcoming it and they even speak it better than I do. In general, I think life here is better and we are now socially accepted in our community. Regardless of the stress caused by the war in Syria, the aid from the Belgian government, along with the enrollment of the kids in school, helped in relieving this burden”,Khalil said.

Khalil now lives with his family in the Belgian province of Limburg, where he started a job in a tourist resort’s cafeteria on Thursday (March 1).

His wife, Entesar, is studying for a business degree in the town of Hasselt while his children Taim and Rasel are enrolled in the local school, which they did not get to do in Turkey.

Through his friend, Khalil joined an Irish folk band which meets regularly to perform songs in Davidts’ basement.

Khalil also still plays Syrian music including his own. In 2016, he took part in a project called Refugees for Refugees, playing the guitar with musicians from various parts of the world, refugees or exiled, who had recently arrived in Belgium.

Khalil still has relatives in Damascus, including his mother, and keeps regular contact with them.

The rebel-held eastern Ghouta, a suburb of Damascus, has been besieged by forces loyal to President Bashar al-Assad since 2013, and in the past few months the siege has tightened, with almost no aid going in and food, water, electricity and medical supplies running out.

Rebels inside the area have fired mortars out towards Damascus and pro-Assad forces have shelled and bombed the enclave, despite a U.N. Security Council resolution demanding a 30 day ceasefire, and a Russian bid for daily five hour pauses.