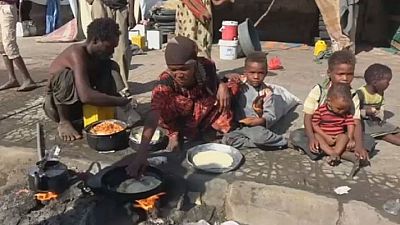 More children than ever before are living in conflict areas and are at risk of death and violence, the charity Save the Children said on Thursday (February 15), with Syria, Afghanistan and Somalia the worst countries for young people.

In a report, the global charity said at least 357 million children – or one in six worldwide – were living in conflict zones, an increase of 75 percent since the early 1990s.

Increased urbanisation, longer-running conflicts and a rise in the number of schools and hospitals being targeted heightened the danger for children, according to Save the Children.

Children are suffering things no child ever should; from sexual violence to being used as suicide bombers. Their homes, schools and playgrounds have become battlefields.

Other threats include abduction and sexual violence.

“We are seeing a shocking increase in the number of children growing up in areas affected by conflict, and being exposed to the most serious forms of violence imaginable,” Helle Thorning-Schmidt, chief executive of the charity, said in a statement.

“Children are suffering things no child ever should; from sexual violence to being used as suicide bombers. Their homes, schools and playgrounds have become battlefields,” added Thorning-Schmidt, the former prime minister of Denmark.

United Nations figures show more than 73,000 children have been killed or maimed in 25 conflicts since 2005, the year it started collating such statistics, according to the report.

Since 2010, the number of U.N.-verified cases of children being killed and maimed has gone up by almost 300 per cent.

Aid agencies say the true figure is likely to be far higher given the difficulties of verifying accounts in conflict zones.

Save the Children said the worsening situation for children in conflict zones was due to increased fighting in towns and cities, and the growing use of bombs in densely populated areas.

Children are being targeted with more brutal tactics, such as the deployment of youth as suicide bombers and the widespread use of weapons such as barrel bombs, according to the charity.

Those in the Middle East are most likely to be living in a conflict zone – two-fifths of children in the region – followed by Africa, with 20 percent living in war-torn areas, it said.

“Children in conflict zones around the world are coming under attack at a shocking scale, with parties to conflicts blatantly disregarding international laws,” said Manuel Fontaine, head of emergency programmes at UNICEF, the U.N. children’s agency.