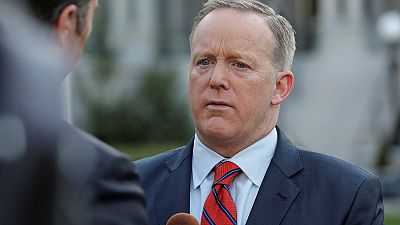 The White House spokesman has apologised after being caught at the centre of a row over comments comparing Hitler to President Assad that appeared to overlook the Holocaust.

“You look, we didn’t use chemical weapons in World War II. You know, you had a, you know, someone as despicable as Hitler who didn’t even sink to using chemical weapons,” Spicer said.

Many of the six million Jews and others murdered during World War II were killed in gas chambers in European concentration camps.

It wasn’t long before Spicer was challenged in the briefing room.

“I just want to give you an opportunity to clarify something you said that seems to be gaining some traction right now. Quote: ‘Hitler didn’t even sink to the level of using chemical weapons.’ What did you mean by that?” one reporter asked.

Spicer appeared flummoxed as he tried to explain his comment.

“I think when you come to sarin gas, there was no, he was not using the gas on his own people the same way that Assad is doing,” he said. “I understand your point, thank you, thank you, I appreciate that. There were not — he brought them into the Holocaust centre, I understand that. But was saying in the way that Assad used them where he went into towns, dropped them down to innocent(s) into the middle of town. It was brought – so the use of it, and I appreciate the clarification there. That was not the intent.”

The comments were made during the Jewish holiday of Passover. Condemnation was swift – not just from political opponents but from many on social media.

“Sean Spicer now lacks the integrity to serve as White House press secretary, and President Trump must fire him at once,” said Steven Goldstein, executive director of the Anne Frank Center for Mutual Respect.

Honestly, “holocaust centers” is weirder than anything else he said.

WATCH: Footage from our collection shows what US forces discovered when they liberated #Buchenwald. pic.twitter.com/jySQOWM6Lf

Afterwards Sean Spicer issued a statement saying in no way was he trying to “lessen the horrendous nature of the Holocaust” – and wanted to draw a distinction with the tactic of planes dropping chemical weapons on population centres.

Later, in a television interview he apologised, acknowledging that he had made a mistake.

Wolf Blitzer: “Why bring Hitler into this?”

Sean Spicer: “I shouldn’t have done it…There really is no explaining it at this point.” pic.twitter.com/y4jC4sWDlf