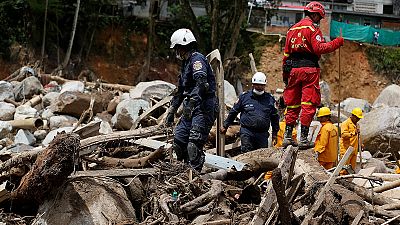 At least 250 people are now believed to have died in Colombia after a huge mudslide swept through entire neighbourhoods in the south western city of Mocoa.

Over 60 of the victims are children.


Families and rescuers are continuing to search through the debris.There is no drinking water or electricity in the area.

Several rivers burst their banks in the early hours of Saturday morning, sending water mud and rubbish crashing down streets and into houses as people slept.

President Juan Manuel Santos made a second visit to the area on Sunday. He said water and energy services would be restored as soon as possible.

Santos blamed climate change for the disaster, saying Mocoa had received one-third of its usual monthly rain in just one night, causing the rivers to burst their banks.The disaster comes after deadly flooding in Peru killed more than 100 people and destroyed infrastructure.

Officials said over 600 people are staying in emergency housing.

The government has vowed investment will be made to make Mocoa better than it was before.
But critics have said more should have been done to protect the area in the first place.