1.6 million people flee South Sudan in the past 8 months - UN 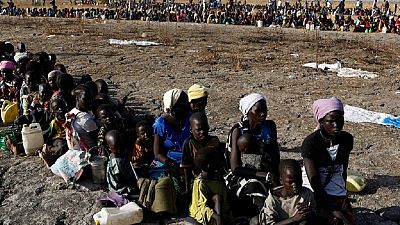 South Sudan has been named as the world’s fastest growing refugee crisis by the United Nations refugee agency after 1.6 million people are displaced or have fled to neighbouring countries in the past eight months.

The UN High Commissioner for Refugees (UNHCR) said last Friday that the rate is alarming as majority of the refugees are fleeing to Uganda where new arrivals spiked in February from 2,000 per day to 6,000.

“The rate of new displacement is alarming, representing an impossible burden on a region that is significantly poorer and which is fast running short of resources to cope … The situation is now critical,” spokesperson for the Office of the UN High Commissioner for Refugees (UNHCR), Babar Baloch, told journalists in Geneva.

The UN agency is still seeking funding to aid the South Sudanese refugees as only 8 per cent of the estimated $781.8 million needed has been realised.

Read here for the reality of the drought situtaion on the ground in South Sudan, Somalia, Kenya, Ethiopia and other parts of Africa affected by climate change and conflict.

Reality of the worst drought since 1945 peaking in parts of Africa https://t.co/NURh6FoQ3z