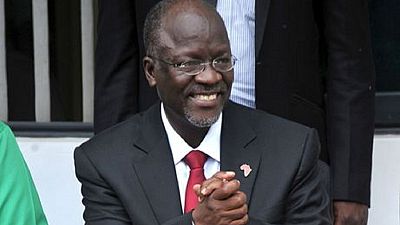 Tanzanian president John Pombe Magufuli has told the security forces to arrest and prosecute anyone caught in the drug trade and that no one was above the law.

“In this war against narcotics, no one is too prominent to be arrested even if they are politicians, security officers, cabinet ministers or the child of a prominent person,” Magufuli told the security chiefs at a meeting.

He is reported to have added that even his wife was caught peddling drugs, the law should take its course. “Even if my wife, Janeth, is involved” she should be arrested, the president added.

In this war against narcotics, no one is too prominent to be arrested even if they are politicians, security officers, cabinet ministers or the child of a prominent person.

On Monday, Magufuli, nicknamed ‘the Bulldozer’ commended the police for suspending junior officers suspected of drugs trafficking. He however tasked that the clampdown be expanded to get big fishes and top dealers in the illicit trade.

Since assuming the presidency in November 2015, Magufuli has launched a campaign against corruption, tax evasion and poaching in the East African country. Rights groups however condemn his handling of media in the country and the government’s stance on gay rights.

He is on record to have suspended an independence day celebration and asked that citizens joined to clean up the country on that day. He has also made unannounced visits to state institutions firing ‘unproductive’ staff.