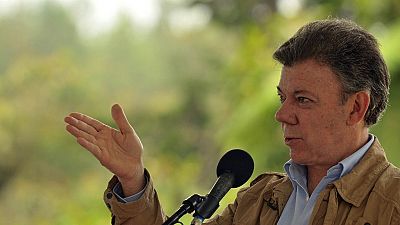 Colombian President Juan Manuel Santos Friday received the Nobel Peace Prize for putting an end to a 50 year conflict with Marxist guerrillas of the Farc.

A lot offered congratulations and others disappointed. Colombia voted to reject the deal in a referendum on Oct. 2, however, Santos was seen as an unlikely choice to win.

The Nobel committee said it hoped the prize would ‘give him strength to succeed in this difficult task.’

Head of FARC, Rodrigo Londoño, who negotiated the peace deal along with Santos, was among many to congratulate Santos.

Others expressed their disappointments.

I don’t get this Nobel Peace Prize for Juan Manuel Santos. It’s, like, “well, you tried, A for effort!

Congrats for the Syrian SyriaCivilDef heroes for winning our hearts and losing a stone prize. You are our #NobelPeacePrize heroes