Day of the Blacks and White in Colombia 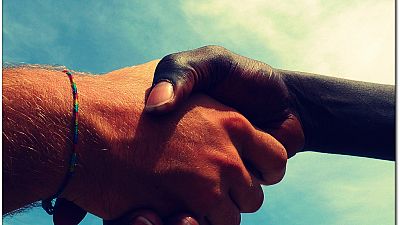 The annual Blacks and Whites Carnival celebrating diversity was organised on Tuesday, January 5 in the southwestern Colombian city of Pasto.

The celebration, named by UNESCO a Masterpiece of Oral and Intangible Heritage of Humanity, draws on the South American country’s indigenous, Spanish and African traditions.

The Day of the Blacks is a commemoration of the day-off which was given during colonial times to the African slaves (an ethnic accomplishment for those days), to display and revive their ancestral cultural celebrations and traditions, including rituals, costumes, colors, music, dance, food and beverage.

The entire town “blackens-up” with all citizens, especially the non-Afro descendants, with fully painted their faces and bodies in black color, to represent the present day unity and integration of the black community with the European descending white population, the indigenous and mestizo peoples which compose the multi-ethnic population of the region.

On the Day of The Whites, artists put together a six-hour parade featuring colourful outfits.

Participants in the festivities usually dress in black and white to symbolise unity and equality while celebrating ethnic and cultural diversity.

Both events are usually marked with extreme livelihood, multicolor parades, dances and gastronomy, vibrating day and night to the beat of drums, as the most representative percussion music which characterizes the African-descending population.

Podcast I The ones who made it: leaving Guinea to build a life in Europe

Podcast I The ones who made it: leaving Guinea to build a life in Europe