After the Russia-Ukraine conflict erupted, ordinary Russians were hit with the consequences of measures imposed by some Western nations. At the time of a global economy, the negative effects of some of these sanctions further convince Zimbabwean activists of the debatable legal basis of sanctions.

The Zimbabwean economy has borne the brunt of US unilateral sanctions for more than 20 years. After the Russia-Ukraine conflict erupted, Russians were hit with measures imposed by some Western nations. However, at the time of a global economy, the negative effects of some of these sanctions are impacting citizens from around the world; further convincing Zimbabwean activists of the debatable legality of such measures.

"The fact that the U.S., on its singular sitting, decided to impose sanctions on Zimbabwe without the approval of the United Nations, which makes the sanctions illegal. They are illegal to the effect that even the ordinary citizens are feeling the heat on these sanctions,Calvern Chitsunge, chairperson of the Zimbabwean anti-sanctions lobby group Broad Alliance Against Sanctions (BAAS) analyses.And the renewal of sanctions, remember, sanctions are put as a measure to disseminate people from the government. It is a way whereby the people or the ordinary citizens, be it the electorate or the workers, be in a position to fight this government for the purpose of a regime change agenda. But that has not happened."

The American Zidera law (Zimbabwe Democracy and Economic Recovery Ac) passed in 2001 and amended in 2018, forbids - amongst other sanctions - global lenders from working with Zimbabwe. The US Congress first voted to sanction Zimbabwe under President Mugabe, citing a land reform program aimed at re-possessing land from minority white farmers for redistribution to landless indigenous Zimbabweans. Since then, the sanctions have had far-reaching effects on the country's economy.

"As Zimbabweans, we will continue to fight for the removal of sanctions by whatever means, the chairman of the BAAS assures.We will never give up. We are Zimbabweans and we cannot be dictated by whoever. So, to surrender or to be told how best can we run the affairs of our country, we debate on our own."

The UN Special Rapporteur on the negative impact of unilateral coercive measures on the enjoyment of human rights, Alena Douhan, visited Zimbabwe last October to assess the impact of sanctions on the country. She found that Western sanctions had undermined human rights in Zimbabwe and exacerbated the pre-existing economic and humanitarian crisis. 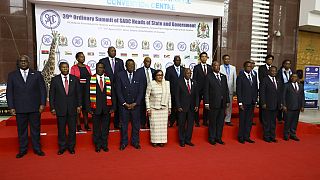 Zimbabwean medical and teaching staff on strike over salaries

Zimbabwean medical and teaching staff on strike over salaries