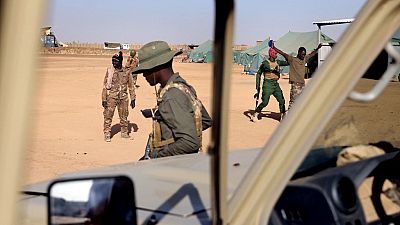 A UN expert said Tuesday in Geneva that the human rights situation in Mali was "worrying", expressing concern about abuses attributed to regular forces and jihadists, as well as restrictions on freedoms under the ruling junta.

Groups affiliated with Al-Qaeda and the Islamic State and other extremist groups "have continued to carry out targeted killings, kidnappings, acts of intimidation, death threats, the imposition of illegal taxes (the Zakat), and criminal activities linked to illegal gold panning," he said. These groups are responsible for 57.20% of human rights abuses, he added presenting a report covering the period from March to the end of December 2021.

However he reported "allegations of serious violations" attributed to regular Malian forces. He referred to accusations of summary executions, enforced disappearances or acts of torture.

Continued "arbitrary arrests and detentions" in the intelligence services, "where people have allegedly been tortured" were also brought to his attention.

The Malian government rejected the accusations reiterating its commitment to ensuring the respect for human rights.

He expressed his "deep concern about the shrinking civic space" complained of by civil society and parts of the opposition. He specifically cited the junta's decision this month to suspend the broadcasting in Mali of the French public media RFI and France 24. The authorities blamed them for broadcasting reports that the Malian army was involved in abuses against civilians.

He stressed that categorically denying the accusations before having conducted investigations "risks casting doubt on the international commitment of the Malian authorities to human rights and their political will to fight the cancer of impunity".

Mali "reiterates its commitment to respect and ensure respect for human rights despite the challenges of all kinds that beset us," an official from the Malian Ministry of Justice responded in a recorded message.

As for impunity, the authorities "are determined (to) put an end to it", he said, citing without further clarification the holding of anti-terrorist trials, but also "the trial of several cases of offences falling under the jurisdiction of military courts" or the ongoing review of the military justice code.

He admitted "delays" in investigations, but "this situation is not due to a lack of political will but rather to security and material constraints". He cited the disappearance of state services and the insecurity in regions such as the centre, one of the main hotbeds of violence.

A report by the UN mission in Mali (Minusma), published after two previous ones, indicated that out of 584 civilians killed in 2021, 67 had died during operations by Malian security forces, including a number of victims of summary or arbitrary executions.

The UNMISA blames radical Islamist groups for more than half of the 584 civilian deaths (331), and another 122 for the deaths of self-proclaimed community defence groups, according to an AFP count of the three different reports.