The deadly crush at Olembe stadium which plunged an entire country into mourning killed at least 8 people, on Monday. One day after the tragic incident, CAF president Motsepe announced the match due to take place in the Olembe Stadium had been moved.

One day after the tragic incident, Patrice Motsepe, the president of the Confederation of African Football has broken the silence and announced adjustments. He first expressing his deepest sympathies to the grieving families: "Let me start by expressing our deep condolences to the families of the spectators who came to Olembe Stadium and have passed on [...] The game that is scheduled for Olembe Stadium on Sunday is not going to take place and, as I said out of respect for our partners and governments, it's going to take place at Ahmadou Ahidjo, which is here in Yaoundé. And there will be other changes that will be made."

During the press conference held at the Ahmadou Ahidjo stadium in Yaoundé, Motsepe also announced he wanted a report to be completed by Friday. “There must be a committee that’s set up to immediately investigate what happened and in that context to find out who was supposed to do what and who did not do and perform their responsibilities", he said.

At least 8 people died after the stampede outside a game opposing Cameroon to The Comores took place on Monday. "Two women in their 30s, four men in their 30s, one child, one body taken away by the family", said a preliminary health ministry report obtained by AFP. Dozens are belived to hgave been injured.

World governing body FIFA issued a statement in relation to the incident and Vincent Aboubakar, the captain of the Indomitable Lions, offered condolences on behalf of the team and the entire staff.

In anticipation of Wednesday’s fixture that will see Egypt and Ivory coast meet in the Japoma stadium (Douala) on Wednesday, the Regional delegation for national security for Littoral issued opening times that spectators must follow in order to avoid any tragic incident. 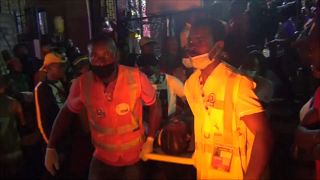 Cameroon: At least eight persons killed in stampede at stadium

Cameroon: At least eight persons killed in stampede at stadium