They can be seen everywhere in Dakar. These motorcycle cabs are now part of the Senegalese capital's transport system. But their excess presence has forced the governor of the region to ban them. This decision has received some backlash from entrepreneurs

"My motorcycles are not driven by Burkinabe or Malians but by Senegalese. It is the same for my colleagues. So, if I am asked to stop transporting, I will not be the only one affected. Thousands of other fathers will also be affected. And it could create worse problems than those that are being put forward," said Cherif Assanem an entrepreneur.

The local authority claim that the new transport system has led to insecurity in the area. But transport experts believe that the main problem lies in the written policy.

"The constrain is in the text. Today, we can include them in our policymaking. They must be organized so that they can do their work properly and also allow them to evolve and why not expand their activities," said Ibrahima Ndongom, a transport expert.

A change of activities is precisely the alternative proposed by this head of a home delivery company. He advocates another approach from the authorities.

"What we are asking the State today is to find a discussion table to exchange. If this type of transport is not authorized, there are other means, whether in the delivery or partnerships that we will create together so that these young people can work and find themselves there," said Maguette Gueye, a director at a home deliveries company in Dakar.

The statement by the governor of Dakar banning the use of motorcycle cabs as a means of public transport in the capital is, in fact, a reminder of a ministerial order dating from 2012.

But the actors and some experts doubt the relevance of this measure in the current context marked by traffic jams, pandemic unemployment of young people but also the lack of prospects of the latter. 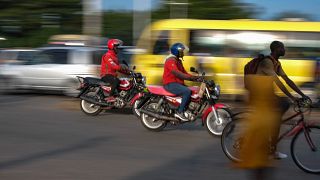