The United Nations on Monday began meetings with Sudanese groups to find a way out of the political deadlock that has paralyzed the country since an October military coup.

UN envoy for Sudan, Volker Perthes, told a news conference in the capital, Khartoum, that consultations will first aim to build confidence between the military and the pro-democracy movement before they possibly engage in direct talks.

"The time has come to end violence and to enter a comprehensive consultative process to solve the crisis," he said.

The turmoil in Sudan has intensified with the resignation of embattled Prime Minister Abdalla Hamdok last week following the failure to reach a compromise between the military and the pro-democracy movement.

Perthes said the consultations that began on Monday could eventually result in a consensus that would help find a compromise to ease the grinding stalemate.

The UN mission was meeting with a civil society group on Monday and would continue engaging with other players in the coming days, he said.

"I can say that the military didn't oppose our initiative and that is important," he added.

He said some protest groups have rejected the UN offer for talks and put the removal of the military from power as a condition to engage in negotiations.

Perthes was referring mainly to the Sudanese Professionals Association, which led the uprising against al-Bashir.

The SPA announced its rejection of talks on Sunday, saying the only way out of the ongoing crisis is through the removal of the generals from power.

In a statement, the ruling Sovereign Council welcomed the UN initiative to facilitate talks among Sudanese players and called on the African Union to "support and contribute" to the efforts. 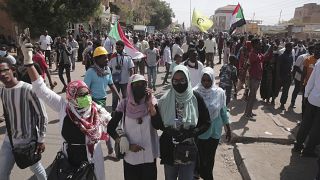