Tunisian President Kais Saied decided Thursday to celebrate the anniversary of the 2011 revolution on December 17, the day it began, arguing that the current date of January 14, which was supposed to mark its end, was not appropriate.

"December 17 is the day of the celebration of the revolution and it is not January 14 as announced in 2011," said Saied at the opening of a ministerial council at the presidential palace in Carthage.

According to Mr. Saied, "the revolutionary explosion started in Sidi Bouzid" in west-central Tunisia on December 17, 2010, the day of the immolation by fire of the street vendor Mohamed Bouazizi. This act caused a popular uprising that ended the undivided rule of President Zine el-Abidine Ben Ali after 23 years in power.

The Tunisian president believes that January 14, 2011, the day of the fall of the dictator Zine el-Abidine Ben Ali, celebrated since as the anniversary of the first uprising of the Arab Spring, was not appropriate because the revolution is according to him still going.

On January 14, "unfortunately the revolution has been hijacked to exclude the people and prevent them from expressing their will and the slogans he had brandished" during his revolution, he said Thursday.

Since 2011, this day is a holiday in Tunisia except in Sidi Bouzid, which celebrates the revolution every year on December 17 in tribute to the gesture of Mohamed Bouazizi.

Tunisia: How Ben Ali planned to return when he fled (secret records) 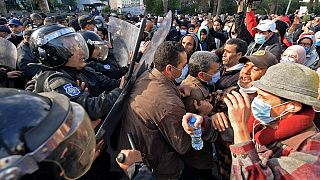 Tunisia: How Ben Ali planned to return when he fled (secret records)