Burundi artists struggle amid the virus and closed borders 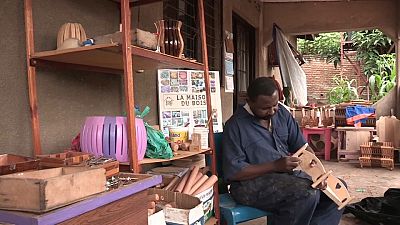 The coronavirus pandemic has had profound effects in many industries all over the world.

Some of the worst affected are artists. It is the case of artists in Burundi who have seen their orders and incomes plummet.

"Orders coming from abroad were cut by three quarters. I would say that this remaining quarter consists of just a few Europeans and some elements of the diaspora who are forced to come and make these trips", says Clovis Mwizero, head artisan at Maison Du Bois Arts and Crafts Centre.

The crisis has been exacerbated by the closure of the East African country's borders, thus rendering exports impossible.

Sculptor Bernard Bigendako says "I have a few orders that haven't been honored. For example, I have an order from Congo Brazzaville, I made a big frame, but because of the lack of means of transportation, it's still here. I have a child who lives in France. I regularly send them my artworks to be sold over there. This is no longer possible. If my child could come or anyone I know is going, I could send my objects".

Earlier this month the government launched a vaccination campaign in the country.

For many, the solution is clear.

According to the World Health Organization (WHO), Burundi was one of the last three countries worldwide to administer vaccines, alongside North Korea and the Horn of Africa who are yet to do so.