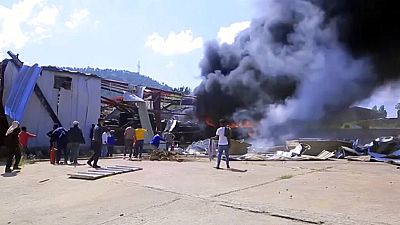 Ethiopia's military launched a new air strike on the Tigrayan capital Mekele on Wednesday, the second bombardment this week against Tigray People's Liberation Front targets in the city.

The raids mark a sharp escalation in the near year-long conflict in northern Ethiopia pitting government forces and their allies against the TPLF, Tigray's once dominant ruling party.

"It targeted at the facilities that TPLF have turned into arms construction and repair armaments sites," Legesse Tulu, head of the Government Communication Service, told AFP by text message.

It was not immediately known if there were any casualties from the strike, which was reported by the TPLF as well as humanitarian and diplomatic sources and a local resident.

"It was heavy and the jet was so close," the resident told AFP, adding that it had destroyed an industrial site in the city.

Prime Minister Abiy Ahmed's government appears to be pressing a new offensive against the TPLF, which dominated national politics for almost three decades before he took power in 2018.

The conflict has already killed untold numbers of people and triggered a deep humanitarian crisis, with the United Nations saying up to two million people have been displaced and hundreds of thousands plunged into famine-like conditions.

"Abiy's reaction to his losses in the ongoing fighting is to target civilians hundreds of kms away from the battlefield," he said on Twitter.

On Monday, Ethiopia's air force carried out two strikes in Mekele, the city held by the TPLF since it was recaptured from government forces in June.

The United Nations said on Tuesday that those raids had killed three children and wounded nine people.

"The intensification of the conflict is alarming," said Jens Laerke, spokesman for the UN Office for the Coordination of Humanitarian Affairs (OCHA).

"And we once again remind all parties to the conflict of their obligations under international humanitarian law to protect civilians and civilian infrastructure."

The government spokesman had initially denied reports about Monday's air strikes as an "absolute lie" but state media later confirmed the military had hit TPLF media and communications targets.

He said the move came in response to TPLF attacks on federal army camps and promised a swift victory.

But by late June the TPLF had regrouped and retaken most of the region including Mekele, in a dramatic turnaround in the conflict.

Since then, the rebels have pushed south from Tigray into the neighbouring regions of Amhara and Afar. The UN said Wednesday that up to seven million people in the three regions are now in need of food assistance and other emergency support.

Ethiopia: Showcase of African brands at the 6th African textile and fashion fair

Ethiopia: Showcase of African brands at the 6th African textile and fashion fair