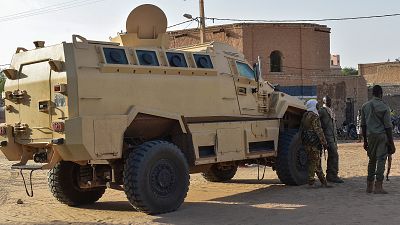 Sixteen soldiers were killed and 10 wounded in an attack in central Mali on Wednesday, security and health officials in the war-torn Sahel state said.

In a statement, Mali's army said the troops had been the target of a "complex IED attack" -- referring to an improvised explosive device -- and then came under heavy gunfire shortly before 11:30 am.

The army blamed the attack on suspected jihadists, and said that after pursuit, 15 of the assailants were killed and 20 motorcycles seized.

According to the army, the provisional toll on its side was nine soldiers killed and 11 wounded. It also said three of its vehicles were destroyed.

However, a health official working in central Mali said the death toll had risen to 16, with the bodies in the local morgue.

Mali has been struggling to contain an Islamist insurgency that first erupted in the north in 2012 and has since claimed thousands of military and civilian lives.

Despite the presence of thousands of French and UN troops, the conflict has engulfed central Mali and spread to neighbouring Burkina Faso and Niger.

Central Mali has become one of the most violent hotspots of the Sahel-wide conflict, where ethnic killings and attacks on government forces are frequent.

Laying roadside bombs -- or IEDs -- is a common tactic of jihadist groups in the region.

Four Malian soldiers were killed by an IED blast in the region on September 20. A jihadist ambush also killed five soldiers in central Mali on September 12.

Both those attacks were claimed by the al-Qaeda-aligned Group to Support Islam and Muslims (GSIM).

GSIM also said that it was responsible for an attack on a mining convoy in western Mali on September 28, which killed five gendarmes.