Years of political violence in Guinea have left marks in many people.

The story of Ibrahima Sory Sissoko is only one among many, a constant reminder of the political upheaval in his country.

Sissoko was injured after the 2020 presidential elections as he was leaving the mosque. He blames his injury on the former president and his police service.

"It was a Friday, right after the 2020 presidential elections, when I left prayers at the mosque. This is when men in police uniforms attacked us, shooting at us. That's when I was shot in my leg. Another friend I was walking with was shot in the head and he died instantly. I was lucky enough to be rescued by people of good will who brought me to a clinic", recounts Ibrahima Sory Sissoko, a trader in Conakry.

Photographer Djouldé Diallo was arrested last year at his home joining dozens of other political prisoners incarcerated under Condé's tenure.

Him along with others were released following the coup that ousted Alpha Condé on the 5th of September.

"....They then sent us to the military tribunal. We were under (pre-trial) investigation, but after that we were awaiting judgement. But since the investigation we were never tried. After ten months, there was the coup d'etat on September 5 which led to our release", says Djouldé Diallo.

Entrepreneur Sanoussi Barry was also beaten and detained by the police last february for participating in a street protest.

Like many in the country, he is happy to see the end of Alpha Condé's rule and is hopeful about the future.

"If he does not deviate from his mission by keeping his word, the people of Guinea will have had their saviour. We pray to God that he can organize free, transparent and credible elections", says Barry.

The military junta that overthrew Condé blames him for corruption and mismanagement but now faces increasing international pressure to release the deposed president and return the country to civilian rule. 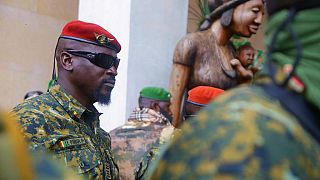