'No to racism' urge Diakhaby and Valencia FC President

The fight against racism in football continues in La Liga after Valencia's Mouctar Diakhaby said he heard a racial insult from Cadiz's Juan Cala.

It resulted in the team temporarily leaving the pitch and calls for footballing bodies to do more to end racism.

"I am with Diakhaby, who cannot speak because he is really affected. Yesterday, in our game against Cadiz, we witnessed a flagrant incident of racism. There is no other way to describe it," said Valencia FC President Anil Murthy.

"Our player, Mouctar Diakhaby, was the victim of an extremely serious racial insult by Juan Cala. Although Cala may deny it, we are all able to recognise a look of guilt, and we believe Mouctar completely. This type of behaviour should not be tolerated in football," he said.

Diakhaby asked his teammates to return and they resumed the game as the team would have to forfeit the match and lose points, but he did not return to the pitch himself.

"We are saddened that, following the incident, there was no reaction to stop the game, and that it was our players who were the ones to leave the field of play. There cannot be a lack of action in light of these types of situations," Murthy said.

"The players had to return to the pitch due to the regulations not protecting the victims and the team in such cases. This must change."

Both Diakhaby and Murthy said: "No to racism." 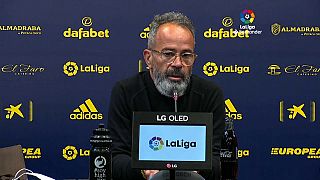