Endangered Southern White Rhino to fly to Japan to breed

They are the second-largest land mammal and an endangered species with a near-threatened status.

To save white rhinos from extinction, a zoo in Taiwan is preparing to send a young female southern white rhinoceros, called Emma, to Japan where they hope she will breed.

"We currently count only around 18,000 of the white rhinoceros species in the world right now, they are on the edge of being extinct," said Tony Liang, Leofoo Village, Manager of Central Recreation and Entertainment.

"If we do not exercise our obligations of being a citizen of planet Earth, this species will only be seen in films and as specimens.

"For a zoo operator, this would be really sad. We are very concerned", he said.

Five-year-old Emma is being prepared for her trip to Tobu Zoo Saitama in Japan and is expected to fly in mid-April.

Her keepers are teaching her some Japanese words and phrases, so the language sounds more familiar to her.

"We gradually let our zookeeper and the rhino's entourage add Japanese language into the animal's life. We start with a few Japanese words. But she will be hearing everything in Japanese when she arrives in Japan," said Sean Wu a zoo veterinarian at Leofoo Village.

Emma is also getting used to her cage for the flight, she is encouraged to enter the cage and rest there, whilst she hears audio recordings recreating the noises heard in the hold of an aircraft.

Her future mate "Moran", is a male rhinoceros of the same species born in December 2010.

Rhinos have long been poached because of their horns.

Southern rhinos are classified as near threatened on the International Union for Conservation of Nature Red List of Threatened Species.

Conservationists say rhinos are important for the survival of many other species because of the role they play in landscaping their native habitat. 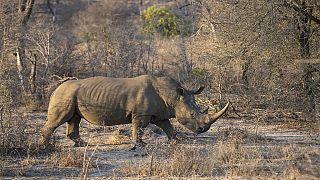 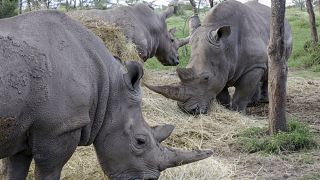 Africa Fights to Save its Endangered Rhinos Despite the Pandemic

Numbers at Taipei lantern festival down amid virus [No Comment]

Africa Fights to Save its Endangered Rhinos Despite the Pandemic

Numbers at Taipei lantern festival down amid virus [No Comment]