A President in Waiting?

Mohamed Bazoum, a believed favourite in the Nigerien presidential race is the sixty-year-old right-hand man of the outgoing president, Mahamadou Issoufou, and is known in Niger for his loyalty to the head of state and the 1990 created current ruling Nigerien Party for Democracy and Socialism — of which he is a founding member and also the President of the Executive Committee.

Since Mahamadou Issoufou's rise to power in 2011, Bazoum, a philosophy professor by profession, has occupied around ten different ministerial positions — such as the Minister of State, Foreign Affairs, Cooperation, African Integration and Nigeriens Abroad and more recently the Minister of State of Niger, Interior, Public Security, Decentralisation and Customary and Religious Affairs.

He is also part of the group of 14 deputies who tabled the censure motion that led to the fall of Hama Amadou's government.

In June 2020, Bazoum resigned from the government to devote himself to the election campaign — led by the president's son Sani Mahamadou Issoufou as the longtime politician hopes to be voted into office on December 27. 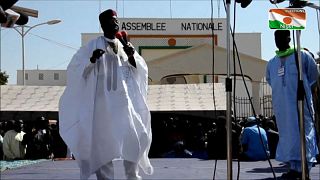 Who are Niger's presidential candidates?

Who are Niger's presidential candidates?