Tunisia: Minister fired and arrested over mismanagement of waste

Tunisian Environment Minister, Mustapha Aroui, has been sacked and arrested on Sunday over the shipment of hundreds of containers of household waste from Italy to Tunisia.

According to a waste management expert, "this case shows that big lobbies of corruption" are at play in a country that already struggles to manage its own refuse.

"The waste that is currently in these containers is collected household waste which, according to the treaty, is classified as hazardous waste and should not be exported to developing countries unable to treat it."

The shipment of hundreds of containers of household waste from Italy to Tunisia has raised suspicions of dirty dealings in a country that already struggles to manage its own refuse.

The saga began when Tunisian customs officials in the eastern port city of Sousse seized 70 shipping containers of trash in the early Summer, quickly followed by another 212 containers.

The containers were full of household waste, banned under Tunisian legislation and international agreements which consider them "dangerous".

The customs service and the environment ministry have traded blame for the conundrum.

The containers were brought to the North African country by Tunisian firm Soreplast, just weeks after the company, dormant for years, relaunched its activities in May.

It had received official permission to recycle industrial plastic scrap for export.

But Aroui had "not signed any document" authorising the import of the trash, his press office said.

Soreplast and the Italian firm it signed the contract with were unavailable for comment despite several efforts to contact them.

A copy of the Tunisian company's request to bring the containers into the country was obtained.

But the contract it signed with an Italian refuse company, explicitly tasks Soreplast with "recovery of the waste and its subsequent disposal" in Tunisia.

According to a customs official, who spoke on condition of anonymity, these documents show that Soreplast made a false declaration on the nature of the imported material.

Soreplast signed the contract with Italian firm Sviluppo Risorse Ambientali Srl, which collects and processes waste in the southern Italian region of Campania, home to Naples.

The contract stipulated that Soreplast would dispose of a maximum of 120,000 tonnes of waste, at 48 euros ($59) per tonne -- a total of more than five million euros.

On July 8, officials decided to confiscate the containers and send them back to Italy, the customs official said.

But they remain in Tunisia.

The case has shone a spotlight on the consequences of the global illegal waste trade, which has been growing notably in Asian countries despite stricter European regulations.

Interpol warned in August that criminal organisations have since 2018 profited from an "overwhelming" surge in illegal waste shipments across the world.

The report said this activity had stoked pollution as the waste was burned and dumped in landfills instead of being recycled.

Consequently the Soreplast case has set off alarm bells in Tunisia, which lies only a few hundred kilometres from European shores and struggles to deal with its own waste.

Just 61 percent of waste in the capital Tunis is collected, according to a recent World Bank report, and most of that ends up in open-air landfill sites.

Tunisian media have widely reported on the waste containers imported by Soreplast and a judicial investigation has been opened, but no arrests have been made.

"This case shows that big lobbies of corruption" are at play in Tunisia, said Hamdi Chebaane, a waste management expert and member of Tunisie Verte, a coalition of environmental NGOs.

Tunisie Verte is taking the environment ministry and senior officials to task over the Italian waste case.

According to Chebaane, the ministry has come under heavy pressure in recent years from businessmen demanding that they be allowed to import waste.

But the Soreplast affair is the first to go public.

"How could customs allow this waste to be brought to Tunisian soil with no official authorisation?," asked Bechir Yahya, head of recycling at Anged, Tunisia's national recycling agency.

The customs service has accused Anged, which operates under the jurisdiction of the environment ministry, of giving a green light for the first 70 containers to leave the port at Sousse for the interior of the country.

The customs service first demanded that Soreplast provide a certificate detailing the nature of the contents of the containers before they were allowed to leave the harbour.

Yahya, in an email exchange with the customs authority said they contained plastic and not illegal waste.

He said he saw "no objection to the importation of these plastic products... that do not contain dangerous products" after seeing the results of samples taken from the waste.

A customs source said that it was on the basis of this email that customs approved the removal of the 70 containers.

Yahya said the email expressed his "personal opinion" and was "not an official document", adding that customs officials were aware that it was not enough to authorise import of refuse.

Journalists who visited the busy port in early December saw the remaining 212 other containers stacked in a corner.

Judicial experts were examining their contents, according to the port's director, who refused to grant journalists access to the garbage despite authorisation from the relevant ministries.

Chebaane mused on the intended final destination of the trash.

"This huge quantity, which Tunisia would have been unable to bury, where would it have been sent," if the case had not come to light? 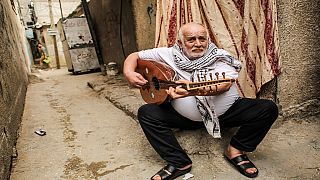 Rising passion for oud music in Egypt amid pandemic

Rising passion for oud music in Egypt amid pandemic