Igad Summit in Djibouti, devoted to Ethiopia, the Kenya-Somalia dispute

The leaders of the Igad countries, a grouping of seven East African countries, met on Sunday in Djibouti for an extraordinary summit devoted in particular to the situation in Ethiopia and the recent tensions between Kenya and Somalia.

The Intergovernmental Authority on Development (Igad) comprises Djibouti - where it has its headquarters - Ethiopia, Kenya, Uganda, Somalia and Sudan, as well as Eritrea but the latter has suspended its participation since 2007.

The summit was targeted on the ongoing peace and security processes in Sudan, Southern Sudan, Ethiopia and Somalia," Sudanese Prime Minister Abdalla Hamdok, current chairman of Igad, said in a speech before the closed session, quoted by the Kenyan presidency in a statement.

Southern Sudan is represented by its vice-president Rebbeca Garang and Uganda by its ambassador Rebecca Otengo.

The chairman of the AU Commission, Moussa Faki Mahamat, who is also attending the summit, called on Igad members to help Ethiopia deal with the humanitarian crisis triggered by the recent conflict in the breakaway region of Tigray, according to the communiqué of the Kenyan presidency.

The 2019 Nobel Peace Prize winner, Abiy sent the federal army to Tigray on 4 November to replace the regional authorities with "legitimate institutions". The Tigrayan leaders, who come from the Tigray People's Liberation Front (TPLF), a party that for nearly 30 years held real power in Addis Ababa, had been challenging the federal government for several months.

Abiy proclaimed an end to the fighting on 28 November with the capture of the regional capital Mekele, but the region remains largely cut off from the world and the UN is urging the prime minister to allow humanitarian organisations access.

Moussa Faki Mahamat also called for dialogue between Kenya and Somalia to ease tensions between them.

After months of rising tensions between the two neighbours, Somalia broke off diplomatic relations with Kenya on 15 December, accusing it of "violations of its sovereignty".

Kenya is one of the main contributors of troops to Amisom, the AU Mission in Somalia, which fights against the radical Islamists shebab, affiliated to Al Qaeda, and supports the fragile Somali government which controls only part of the Somali territory.

One of the main disputes between the two countries is in Jubaland, a southern Somali state bordering Kenya, which sees it as a buffer zone between its territory and the shebab, and supports the regional president, Ahmed Madobe. 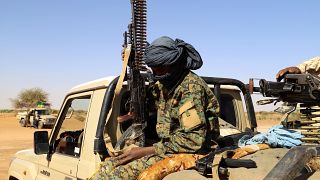